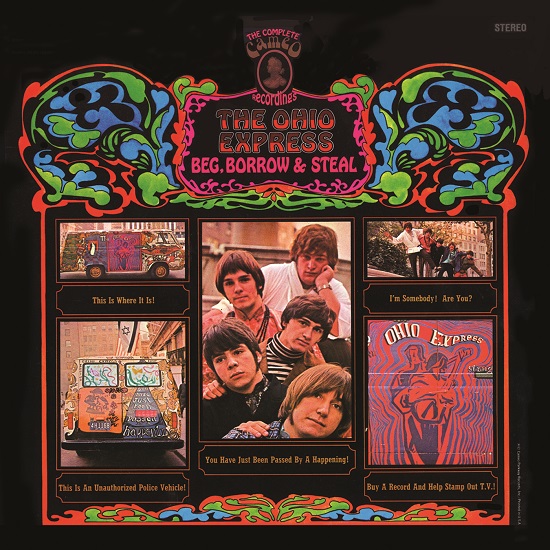 GET IT FROM THESE RETAILERS:
AMAZON itunes SPOTIFY

The tangled history of the Ohio Express is difficult to unwind, but the one constant in the band’s chronology are the guiding hands of legendary bubblegum/garage producers Jerry Kasenetz and Jeffrey Katz, whose Super K Productions were behind hits by everybody from the Shadows of Knight to the 1910 Fruitgum Company to the Music Explosion. With regard to the Ohio Express, their first hit (“Beg, Borrow and Steal”) was actually a song recorded by another band: the Rare Breed, who recorded it for Attack Records in 1966. The Cameo label then re-mixed and released the song, which went to #29 on the 1967 charts—but they had no band to promote it, as the Rare Breed had left Super K Productions, never to record again! So, a Springfield, Ohio band named Sir Timothy & the Royals was hired to tour and to lay down more tracks under the Ohio Express name, some with them and some with a house band fronted by Royals/Express vocalist Dale Powers, with two songs (“I Find I Think of You” and the unreleased “Life Is a Mystery”) written/co-written by none other than a young Joe Walsh! Now, for the first time, ABKCO and Real Gone Music have assembled ALL the tracks recorded by this legendary bubblegum band for the Cameo label, including the entire Beg, Borrow and Steal album, four single sides and two unreleased tracks. ABKCO’s Grammy-winning engineer Teri Landi has lovingly compiled all 17 songs from the original analog tapes; Jim Allen provides the liner notes. A must for ‘60s bubblegum and garage fans!