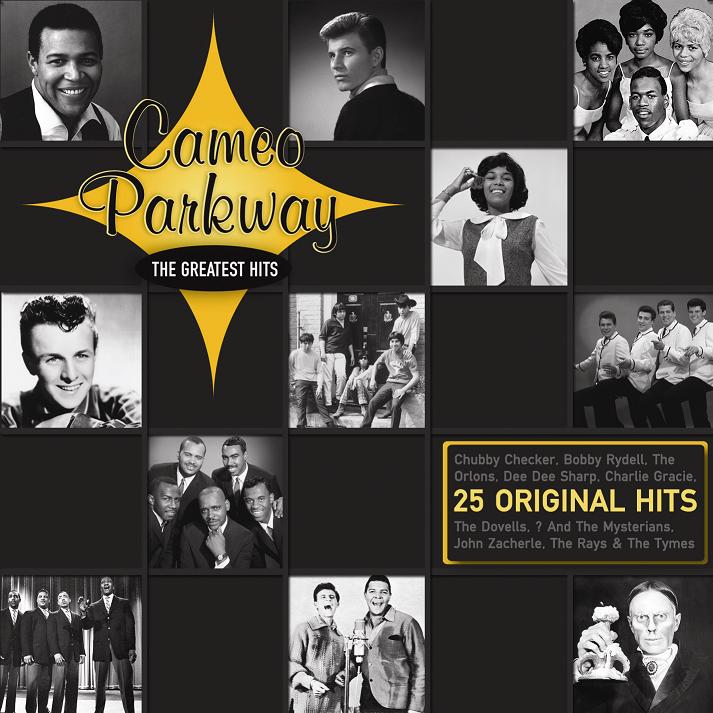 Album Review by Richie Unterberger, AllMusic.com:
When much of the Cameo Parkway label catalog finally got reissued on CD, this 25-track compilation gathered most of the biggest hits the company had issued between the mid-’50s and mid-’60s. The label’s biggest stars — Chubby Checker, Bobby Rydell, Dee Dee Sharp, and the Orlons — are all represented here by several tracks apiece, with one or two by less prolific chart artists like the Dovells, the Tymes, the Rays (their one-shot doo wop classic “Silhouettes”), Charlie Gracie (the rockabilly-pop hit “Butterfly”), and ? & the Mysterians (their 1966 garage rock chart-topper “96 Tears”). It’s true there’s no strong musical theme that unites this material, which encompasses pop-soul, early teen idol smashes, the most popular twist records ever made, rockabilly, and even (with John Zacherle’s “Dinner with Drac, Pt. 1”) novelty. It’s also true that there might be room for some debate over the track selection, which misses some notable Cameo Parkway hits like Checker’s “The Fly,” Gracie’s “Fabulous,” and Rydell’s “Forget Him” and “Kissing Time.” And the package certainly could have done with at least a short liner note, instead of offering nothing but credits and chart positions. Still, there are many good pop/rock hits here, including quite a few very famous ones, like Checker’s “The Twist,” the Dovells’ “Bristol Stomp,” Sharp’s “Mashed Potato Time,” the Tymes’ “So Much in Love,” and the Orlons’ “South Street.” You can get some more music by the artists on the single-artist anthologies and various-artists box set of Cameo Parkway material that ABKCO released around the same time. But for those who don’t want to go that far, and/or are primarily concerned with finally getting a lot of big hits that eluded CD reissue for decades, this is a good accumulation/sampler of the label’s most popular efforts.