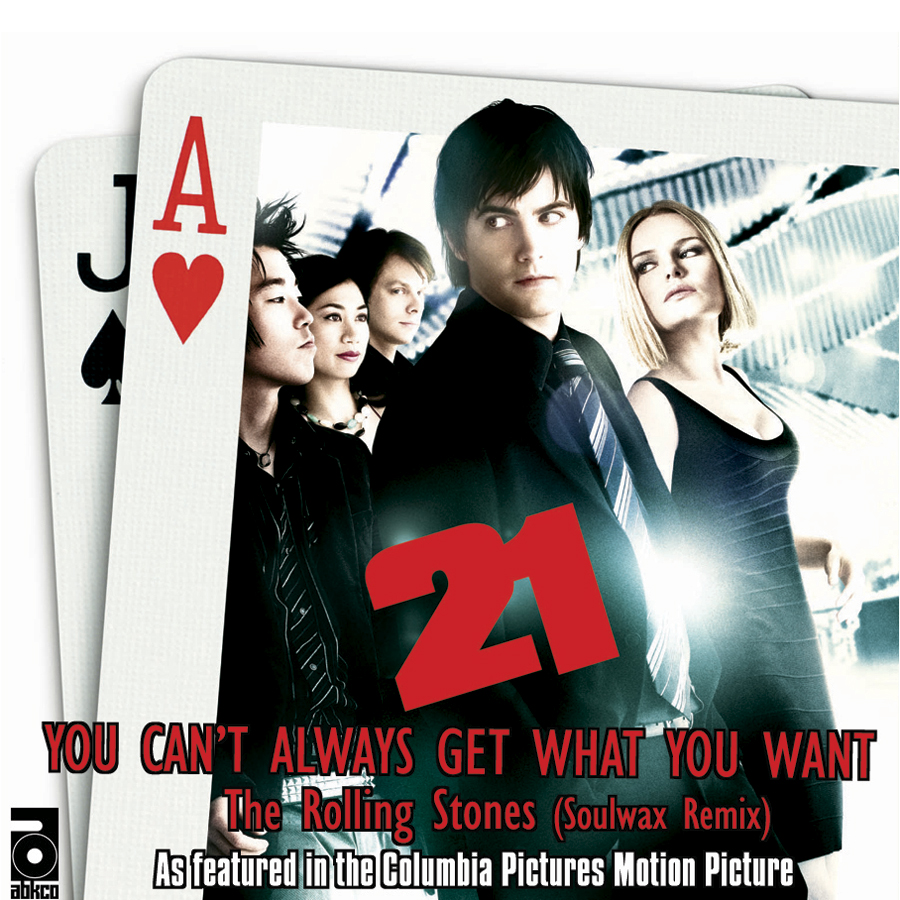 GET IT FROM THESE RETAILERS:
Amazon iTunes spotify google play

Soulwax (a duo consisting of brothers David and Stephen Dewaele) are best known for their influential contributions to the pop genre under the names Flying Dewaele Brothers and 2 Many DJ’s, as well as their landmark record “As Heard on Radio Soulwax Pt 2.” The brothers have also released several major albums under the Soulwax name; their 2004 album “Any Minute Now” yielded three hit singles. The duo has produced a number of successful remixes with artists as diverse as LCD Soundsystem, Robbie Williams, Gorillaz, Daft Punk, and Einstürzende Neubauten.

“You Can’t Always Get What You Want,” long a staple in The Rolling Stones’ live repertoire, is noteworthy for the participation of the London Bach Choir in the sessions that took place over two days in November 1968. The song was included in the band’s “Let It Bleed” album, released in 1969.

Columbia Pictures’ action/adventure “21” is inspired by the true story of the very brightest young minds in the country – and how they took Vegas for millions. Ben Campbell (Jim Sturgess) is a shy, brilliant M.I.T. student who – needing to pay school tuition – finds the answers in the cards. He is recruited to join a group of the school’s most gifted students that heads to Vegas every weekend armed with fake identities and the know-how to turn the odds at blackjack in their favor. With unorthodox math professor and stats genius Micky Rosa (Kevin Spacey) leading the way, they’ve cracked the code. By counting cards and employing an intricate system of signals, the team can beat the casinos big time. Seduced by the money, the Vegas lifestyle, and by his smart and sexy teammate, Jill Taylor (Kate Bosworth), Ben begins to push the limits. Though counting cards isn’t illegal, the stakes are high, and the challenge becomes not only keeping the numbers straight, but staying one step ahead of the casinos’ menacing enforcer: Cole Williams (Laurence Fishburne). The film is directed by Robert Luketic. The screenplay is by Peter Steinfeld and Allan Loeb, based on the book Bringing Down the House by Ben Mezrich. The film is produced by Dana Brunetti, Kevin Spacey, and Michael De Luca.