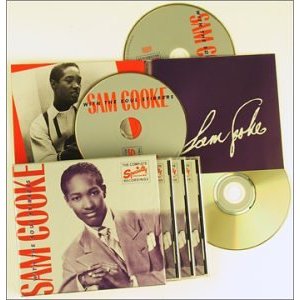 Complete Recordings of Sam Cooke with the Soul Stirrers

Album Review by Richie Unterberger, AllMusic.com:
They were known as the Soul Stirrers when they did the 1951-1957 recordings on this three-CD, 84-song collection. It’s billed to Sam Cooke with the Soul Stirrers, though, as it’s the ultimate collection of sides he recorded as a member of the group for Specialty Records, along with seven tentative secular pop/rock sides he did for the label as a solo singer in 1956. Cooke doesn’t sing lead on all of the Soul Stirrers’ tracks, though there are plenty of his leads to hear throughout the set; he shares lead duties with Paul Foster, although by the end of his time in the outfit, Cooke was taking most of the solo leads. There’s also one cut, “All Right Now,” on which Cooke shares lead with Rev. Julius Cheeks (two alternate versions of the song are also on the set). Even if Cooke isn’t always the solo lead, however, he’s a big presence on all of these sides, which represent both an important summary of his career prior to achieving pop stardom and a major body of gospel music. While much of the material is traditional (with Cooke contributing some originals), the arrangements do evolve, including some drums, organ, piano, bass, and electric guitar at various points. The link between gospel, R&B, and rock & roll becomes evident to more secular-minded listeners, sometimes strikingly so in Cooke’s phrasing, which, even on songs as far back as 1953 (“I’d Give up All My Sins and Serve the Lord”), contained clear antecedents to his vocals on his first breakthrough pop hit, “You Send Me.” Naturally those antecedents are heard strongest on the seven 1956 solo cuts that represented his first pop ventures, and although these are on the innocuous side, they’re enjoyable foreshadowings of his rock & roll years. Numerous alternate takes and three 1955 live songs (with good sound) complete the most comprehensive portrait of Cooke’s gospel years. Note, though, that the version of “I’ll Come Running Back to You” — a Top 20 entry in the wake of “You Send Me” — lacks the overdub on the hit single.