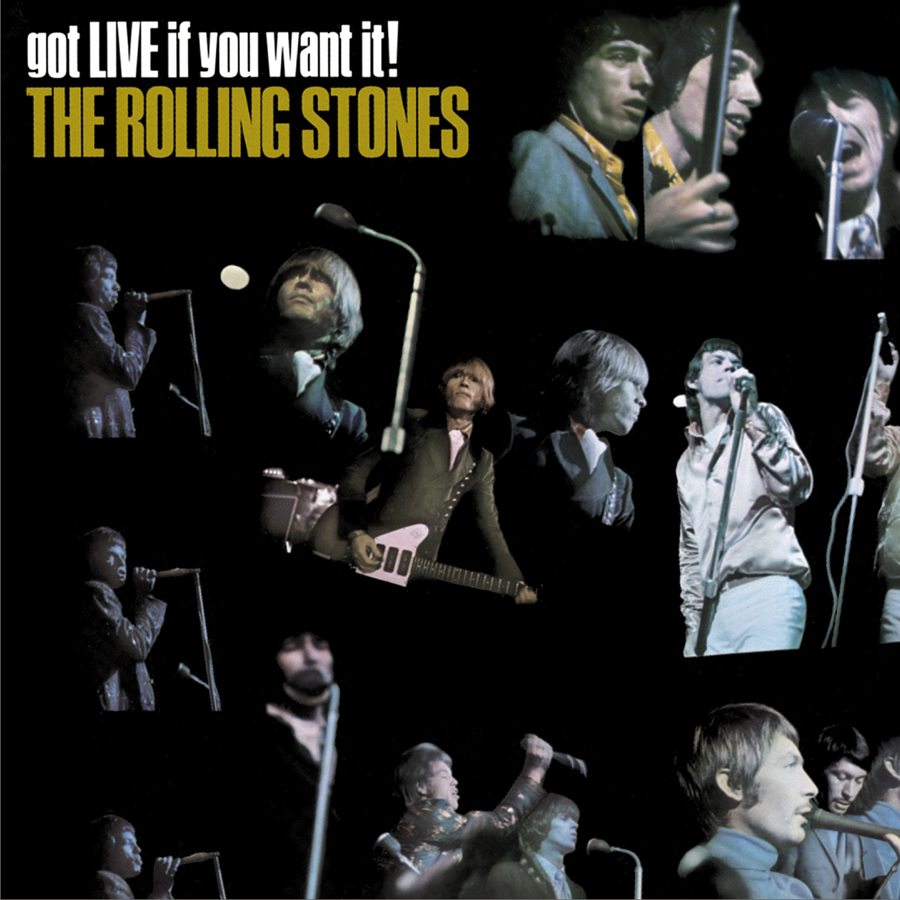 Got Live If You Want It!

Album Review by Richie Unterberger & Bruce Eder, AllMusic.com:
A live document of the Brian Jones-era Rolling Stones sounds enticing, but the actual product is a letdown, owing to a mixture of factors, some beyond the producers’ control and other very much their doing. The sound on the original LP was lousy — which was par for the course on most mid-’60s live rock albums — and the remasterings have only improved it marginally, and for that matter not all of it’s live; a couple of old studio R&B covers were augmented by screaming fans that had obviously been overdubbed. Still, the album has its virtues as a historical document, with some extremely important caveats for anyone not old enough to recognize the inherent limitations in a live album of this vintage. The first concerns the history of this release — the Got Live if You Want It! album (not to be confused with the superior sounding but much shorter, U.K.-only extended-play single, issued in England in mid-1965) was a U.S.-only release late 1966, intended to feed a seemingly insatiable American market. As a best-of album had been issued in March 1966 and Aftermath in June of the same year, and the Stones had just come off of a major U.S. tour (which proved to be their last for over three years), another album was needed, to bridge the gap in America between the those earlier LPs, the two most recent singles — “Paint It, Black” and “Have You Seen Your Mother, Baby, Standing in the Shadow?” — and the Between the Buttons album, which was not going to make it out in time for the Christmas season.

The result was Got Live if You Want It!, which was intended to be recorded at a concert at Royal Albert Hall on September 23, 1966, the Stones’ first live appearance in England in over a year. The problem was, as was memorably stated by a writer in Rolling Stone magazine a few years later, the Stones in those days didn’t play concerts — they played riots, and that was precisely what happened at Royal Albert Hall, as several hundred fans charged the stage, overwhelming the band before they’d gotten through the opening number, “Paint It, Black.” The scene was captured in the footage later used in the promotional film for “Have You Seen Your Mother, Baby, Standing in the Shadow?” What was left of the show, once order was restored, was taped, along with at least two other shows on that tour over the next week or so; and it should also be remembered that in those days the group seldom played for more than 30 to 40 minutes, and sometimes less than that, much like the Beatles in concert. And the audience noise, much as it was with the Beatles, was overwhelming in the days before stacks of Marshall amps became routine in a band’s equipment — indeed, at some shows, at certain moments, only the tempo of Charlie Watts’ drumming could tell you which song the group was doing, and the band members couldn’t hear much more than the crowd — matters such as tuning instruments and precise playing, even down to the most routine changes, became exercises in futility. Add to that the limitations of live recording, and the inevitable sound leakages and other problems, and one can see how this album was easier to conceive than to actually bring off successfully. When all of the tapes were assembled, the producers were left with about 28 minutes of material that was usable to varying degrees, and even that was somewhat wishful thinking by the standards of the day. (Apart from the Kinks’ Live at Kelvin Hall [aka The Live Kinks], few groups or record labels in 1967 had the courage to release a concert album that sounded like the real article.) And here, someone — the Stones’ producer, London Records, whoever — started fiddling around, twirling knobs, changing balances, and making the stuff supposedly sound “better,” and bringing in a couple of studio tracks, “I’ve Been Loving You Too Long” and “Fortune Teller,” and laying on some crowd noise to bring the show up to an acceptable length for an LP.

The result is the Rolling Stones album that has undergone more changes than any other in its various incarnations. First, there was the original LP version and the mix it featured, which left out most of the introduction and virtually any between-song talk by Mick Jagger; his voice was brought up and the rest of the band sounds somewhat suppressed; one channel of the stereo version had Jagger’s voice isolated and amplified to ridiculous prominence, while the other channel had a relatively “flat” and realistic balance on the concert material. In fact, if you took the latter channel and bumped it onto both channels of an open-reel tape, the result was a short but pretty good live performance. In the mid-’80s, ABKCO Records took control of the Stones’ library and went back to the original source tapes for the Got Live if You Want It! CD, re-editing the material in consultation with producer Andrew Oldham, improving the mixes on several of the songs, including “The Last Time,” “Time Is on My Side,” and “19th Nervous Breakdown,” and also giving a fuller account of Long John Baldry’s introduction. That was a step in the right direction and improved the record somewhat. Then, in 2002, came the SACD hybrid remastering of the album for a new CD edition, which is likely to be the last word in improvement on this album. The balances are finally realistic, in terms of Jagger’s voice and the rest of the band — Bill Wyman’s bass work and Charlie Watts’ drumming are consistently rewarding, and Keith Richards and Brian Jones have their moments, as well, though not as consistently. The performances were done, after all, under what were, at best, siege conditions, with little opportunity for finesse or nuance.

The one element that does come through consistently is the excitement and sheer kinetic energy generated by the band. The older songs come off the best — though one is glad that they do “Lady Jane,” the dulcimer-dominated piece comes off in this setting a lot like “Yesterday” did when the Beatles did that in concert; audiences shriek and scream over a quiet, reflective song that really doesn’t merit that response, and the result as a live performance is off-kilter; the group’s rendition of their then-current single, “Have You Seen Your Mother, Baby, Standing in the Shadow?” is a bit chaotic, although it does give the band a chance to show what Keith Richards’ critique of the studio version’s burying of the rhythm section was all about — he and Brian Jones do their best to compensate for the lack of overdubbed brass stabs. The only real disappointment is the finale, “Satisfaction,” which comes off as quick, ragged, and chaotic — it was impossible to interlock the guitars the way the group’s sound needed, and it has no real ending, which is why it’s faded down. The album is a lot more uneven than the much shorter EP of the same name (available on Singles 1963-1965), but it is now at least a fairly honest document of what rock & roll concerts in the mid-’60s were like. Ironically, Got Live if You Want It! wasn’t released in England until more than a decade later and, in the interim, in 1971, Decca Records took some of its tracks, jumbled them up with some cuts off the 1969 concert album Get Yer Ya-Ya’s Out!, and combined them under the misleading title Gimme Shelter, as though it were the soundtrack to that movie (despite a disclaimer on the back), and generally infuriated fans on both sides of the Atlantic in the process.