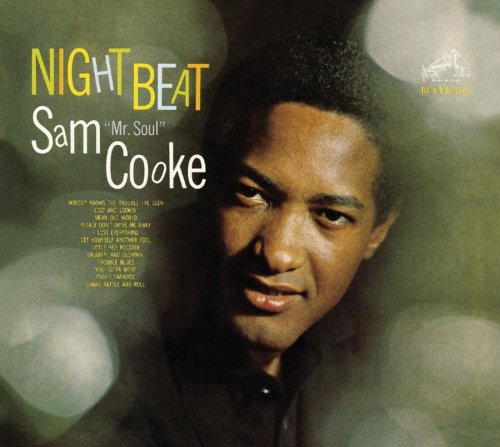 Album Review by John Bush, AllMusic.com
Saddled with soaring strings and vocal choruses for maximum crossover potential, Sam Cooke’s solo material often masked the most important part of his genius — his glorious voice — so the odd small-group date earns a special recommendation in his discography. Thankfully, Cooke’s voice took center stage on this admirably low-key session from February 1963, recorded in Los Angeles with a quartet of studio veterans. Unlike so many session crews and producers of the time, these musicians gave him plenty of space and often simply framed Cooke’s breathtaking vocals. (On one of the best tracks here, “Lost and Lookin’,” he’s barely accompanied at all; only bass and cymbals can be heard far in the background.) The results are wonderful — except for his early Soul Stirrers sides, Night Beat is the best place to marvel at one of the two or three best voices of the century. The songs are intimate blues, most taken at the pace of a late-night stroll, but despite the dark shading and heart-rending tempos, Cooke’s voice is so transcendent it’s difficult to become depressed while listening. Cooke also wrote three of the songs, including the excellent “Mean Old World,” and rendered the traditional “Nobody Knows the Trouble I’ve Seen” practically unfamiliar with his own re-arrangement. Cooke also stretches out on a pair of jump blues classics, “Little Red Rooster” and “Shake, Rattle and Roll,” summoning some honest grit for the former and putting the uptown swing into the latter. He also allows some solo space, from Barney Kessel’s simple, unadorned solo on “Get Yourself Another Fool” to Billy Preston’s playful organ vocalizing on “Little Red Rooster.” If Sam Cooke had lived longer, there would’ve been several more sessions like this, but Night Beat is an even richer treasure for its rarity.