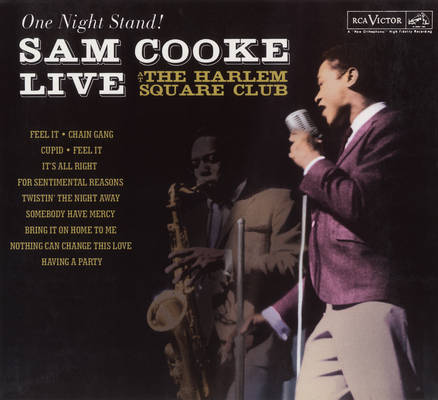 GET IT FROM THESE RETAILERS:
HD TRACKS AMAZON iTunes Google Play Spotify

For anyone who thought they knew Sam Cooke’s music based on the hit singles, this disc will be a revelation. This is the real Sam Cooke, doing a sweaty, raspy soulful set at the Harlem Square Club in North Miami, FL, on Jan. 12, 1963, backed by King Curtis and his band, a handful of local musicians, and Cooke’s resident sidemen, guitarist Clifford White and drummer Albert “June” Gardner. To put it simply, it’s one of the greatest soul records ever cut by anybody, outshining James Brown’s first live album from the Apollo Theater and easily outclassing Jackie Wilson’s live record from the Copa. Cooke’s pop style is far removed from the proceedings here, which have the feel of being virtually a secular sermon. The record opens with the frantic, desperate chant-like “Feel It,” followed by a version of “Chain Gang” that has all of the gentling influences of the single’s string accompaniment stripped from it — Cooke’s slightly hoarse voice only adds to the startling change in the song, transformed from a piece of pop-soul into an in-your-face ode to freedom and release. “Cupid,” perhaps the most sweetly textured song that Cooke cut during the 1960s, gets the full soul treatment, with horns and Curtis’ sax up front and Cooke imparting an urgency here that’s only implied in the studio rendition. “Twistin’ the Night Away” gets two hot King Curtis sax solos, the highlights of a pounding, rippling performance with a beautifully vamped extended ending (with the drums, bass, and White’s guitar wrapping themselves ever tighter around the central riff) that never would have made it to the floor of the Copa. “Somebody Have Mercy” leads into a long vamp by Cooke, a brief, soaring quotation from “You Send Me” that could easily have been a high point in sheer intensity — and then Cooke and the band crank the tension and the spirits several notches higher with the greatest version of “Bring It on Home to Me” ever done by anybody. It all ends with a version of “Having a Party” that manages to be both soothing and wrenching at the same time, Cooke luxuriating in every nuance as the crowd joins in singing, reaching a higher pitch to the gently swinging tune, the drums kicking in harder, the rhythm guitar rising up, and Curtis’ sax and the horns rising up slowly while Cooke goes on with his singing, which is more like preaching and the group sounds like it could play the riff all night. It’s one of the cruel ironies of the recording business that this unique and extraordinary concert recording went unreleased for almost 22 years, in favor of the more polished (but also more antiseptic and duller) Sam Cooke at the Copa.