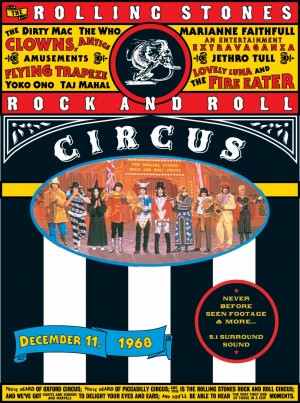 “Rock and Roll Circus” was long one of the most elusive of rock artifacts. Shot Dec. 11-12, 1968, and planned as a BBC-TV special and theatrical release, the 65-minute picture mated the aerialists, fire-eaters and acrobats of Robert Fosset’s Circus with the day’s top rock talent.

Highlights include the Who blasting through the mini-opera “A Quick One While He’s Away” and John Lennon — backed by an ad hoc supergroup that included Eric Clapton, the Stones’ Keith Richards (on bass) and Jimi Hendrix Experience drummer Mitch Mitchell — making his first solo flight outside the Beatles. Yoko Ono, Jethro Tull, Taj Mahal and Marianne Faithfull rounded out the lineup.

The Rolling Stones headlined, playing a six-song set that climaxed with singer Mick Jagger writhing like a man possessed through “Sympathy For the Devil.” But the band, exhausted by the daylong shoot, was unhappy with the results.

Thus, “Rock and Roll Circus” remained in the vaults for nearly three decades. However, in 1996, the feature was screened at the New York Film Festival to coincide with its first videocassette release.

In 2004, “Rock and Roll Circus” was released on DVD, remastered in 5.1 surround sound, with additional footage; new commentaries by Jagger, Richards, Ono, director Michael Lindsay-Hogg, ex-Stones bassist Bill Wyman, and others; and a film interview with the Who’s Pete Townshend.