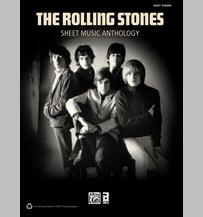 GET IT FROM THESE RETAILERS:
Alfred

The Rolling Stones: Sheet Music Anthology is perfect for pianists who are fans of the legendary British rock group. While the arrangements are for beginning pianists, the true essence of the band’s legendary songs from the ABKCO Music Inc. catalog is skillfully captured. Song favorites and greatest hits are included, such as “19th Nervous Breakdown,” “Honky Tonk Women,” “Paint it Black,” “Ruby Tuesday,” “(I Can’t Get No) Satisfaction,” and many more. The songbook also includes lyrics, guitar chords, and pictures featuring some of the band’s album covers.

The titles featured in The Rolling Stones: Sheet Music Anthology span from 1963 to 1971, covering the Stones’ earliest efforts and chronicling the band’s ascendance to international superstardom. The emergence of the band has been credited to bringing blues-based rock into the forefront of music popularity and, more importantly, provided a platform for the groundbreaking songs written by the team of Mick Jagger and Keith Richards. Their peers acknowledged the enduring quality of their work when they were inducted into the Songwriters Hall of Fame in 1993.
As part of Alfred’s ongoing commitment to improving the environment, this songbook is printed on 100% recycled paper.

The Rolling Stones: Sheet Music Anthology (00-39071) is now available for $16.99 at music retail stores and at alfred.com/piano.