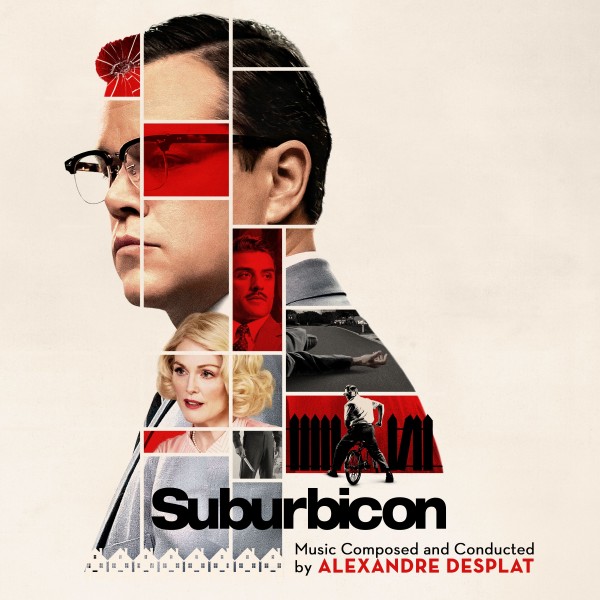 Suburbicon is a peaceful, idyllic suburban community with affordable homes and manicured lawns… the perfect place to raise a family and in the summer of 1959, the Lodge family is doing just that. But over the course of a week, a series of events shows us what lies just beneath the surface of this “tranquil” town. This is a tale of very flawed people making very bad choices. Welcome to Suburbicon!

Parisian composer Alexandre Desplat, who won the 2015 Academy Award® for his score for The Grand Budapest Hotel (soundtrack also available from ABKCO), has been working in his field for more than three decades. Starting with French films, he crossed over to English language film scoring in the late 1990s, and has since earned an impressive number of accolades, including seven more Oscar® nominations. The Film Stage describes Desplat as “a man whose significance to contemporary cinema only grows greater with each passing year,” and characterizes Suburbicon’s score as “emotionally unshackled” and “sweeping.”

“George loves music and film music, and when we gather together there are no limits to his enthusiasm,” Alexandre Desplat says of Clooney. “Suburbicon is our sixth film together with George as producer and/or director. Each film offered me a different canvas, a different type of score to write, and a new endeavor.”

Twenty-two of the tracks on Suburbicon (Original Motion Picture Soundtrack) are Desplat originals, the lone exception being “When I Fall In Love,” a standard that was written by Victor Young and Edward Heyman for the 1952 film One Minute to Zero. The jazzy instrumental rendition heard on the Suburbicon soundtrack features Allen Hoist’s lead sax.

Suburbicon (Original Motion Picture Soundtrack) was recorded by Peter Cobbin at the world famous Abbey Road Studios and British Grove Studios in London. It was mixed by Peter Cobbin and Kirsty Whalley at Henry Licht in Islington.

All tracks composed by Alexandre Desplat except *composed by Victor Young and Edward Heyman.