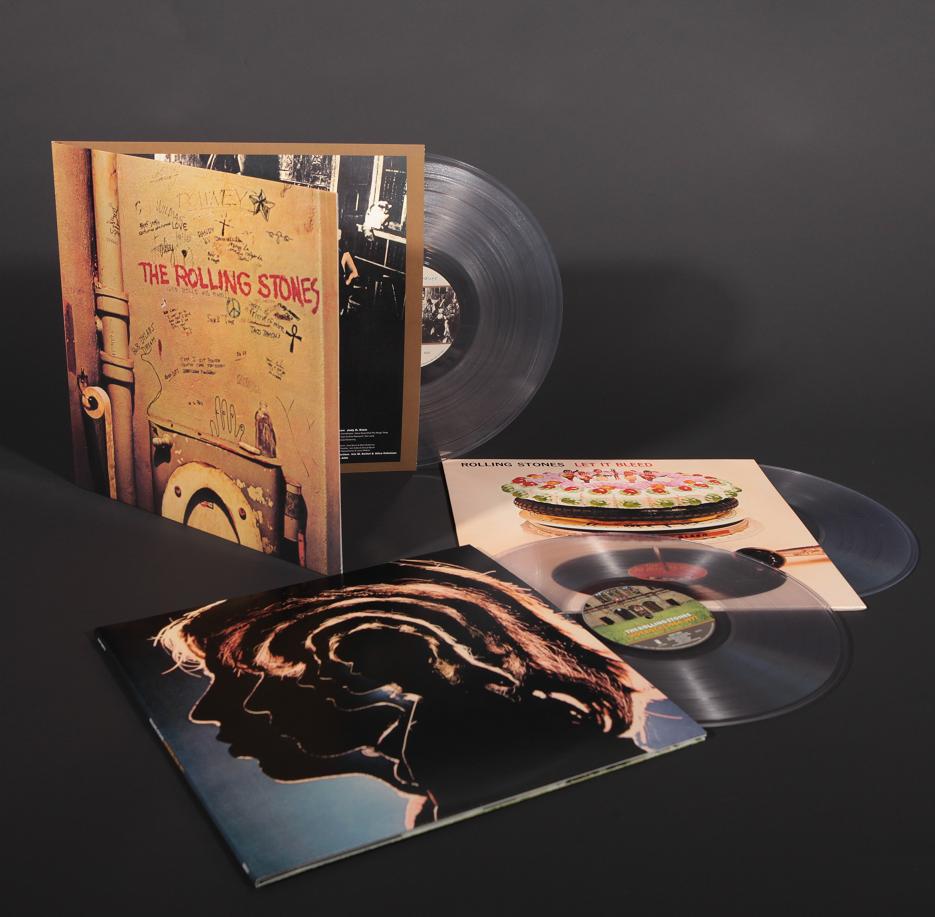 Beggars Banquet, Let It Bleed and Hot Rocks 1964-1971, the most celebrated albums in ABKCO’s catalog of Rolling Stones releases, will debut later this month as 180-gram LPs, pressed on clear vinyl, in celebration of the band’s 50th anniversary and ’50 and Counting’ tour. The launch of a projected series titled “The Rolling Stones Clearly Classic,” featuring these three initial releases out May 28th, focus on the three Rolling Stones albums that reflect the group’s formative years and transformation into “The World’s Greatest Rock and Roll Band” at the end of the 1960’s and into the early 70’s. All three albums have been meticulously mastered from high resolution audio files sourced from the original master tapes, assuring optimal sound quality that exceeds both conventional CD audio and digital downloads.

Beggars Banquet was a breakthrough album for the Rolling Stones, recorded in 1968 in London and Los Angeles and produced by Jimmy Miller. It was the last full album with founding member Brian Jones in the line-up and includes such classics as “Sympathy For the Devil,” (the subject of the Jean Luc Godard film of the same title), “Street Fighting Man,” and “Factory Girl.” Guest musicians and vocalists on the album include Nicky Hopkins, Rocky Dijon, Ric Grech, Dave Mason and The Watts Street Gospel Choir. Complete track listing below.

Hot Rocks 1964-1971 is a collection, on 2 LPs, of tracks that, in essence, launched the band into the public consciousness with a run of hits that went on to establish the Rolling Stones’ preeminence on both sides of the Atlantic. A total of 21 songs, recorded over 7 years, on four sides, including “Time Is On My Side,” “(I Can’t Get No) Satisfaction, “”Get Off My Cloud,” “19th Nervous Breakdown,” “Let’s Spend The Night Together,” “Jumpin’ Jack Flash, “Sympathy For the Devil,” “Midnight Rambler,” “You Can’t Always Get What You Want,” “Brown Sugar,” Wild Horses” and more, are featured.

Originally released in December 1971, the album remained on the Billboard album chart for 243 consecutive weeks and was certified 12 times Platinum by the RIAA. The collection includes 11 Top 10 US and UK hits and 7 hit singles that reached #1. Hot Rocks 1964-1971 is, by any measure, one of the greatest of all greatest hits albums ever released. Complete track listing below.

LP 1 Side 1
Time Is On My Side
Heart Of Stone
Play With Fire
(I Can’t Get No) Satisfaction
As Tears Go By
Get Off Of My Cloud
LP 1 Side 2
Mother’s Little Helper
19th Nervous Breakdown
Paint It, Black
Under My Thumb
Ruby Tuesday
Let’s Spend The Night Together
LP 2 Side 3
Jumpin’ Jack Flash
Street Fighting Man
Sympathy For The Devil
Honky Tonk Women
Gimme Shelter
LP 2 Side 4
Midnight Rambler (Live)
You Can’t Always Get What You Want
Brown Sugar
Wild Horses