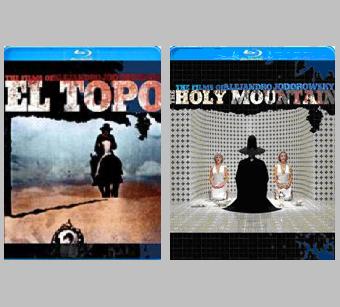 The Film That Launched the Midnight Movie Craze Comes to Blu-ray™!

New York/Beverly Hills – El Topo and The Holy Mountain, the ground-breaking cult classics from director Alejandro Jodorowsky, are among the most sought-after film titles yet to be released on Blu-ray™. El Topo is credited with starting the Midnight Movie phenomenon more than 40 years ago. To this day, both films continuously screen at art houses, museums and film festivals throughout the world.

In 2006, following the restoration and remastering of both films to HD, El Topo and The Holy Mountain were shown in the Special Events section at the prestigious 44th Annual New York Film Festival. The films, originally made in the 1970’s in Mexico, were restored and remastered under the close supervision of Jodorowsky himself. That same year both films were featured in the Cannes Classics section of the Cannes International Film Festival. El Topo was screened before a black-tie audience at Salle Bunuel in the Palais des Festivals and The Holy Mountain was honored with the prized “Centerpiece Screening,” which was held for the first time ever on the beach at sundown.

Now, at long last and in response to requests from scores of Jodorowsky fans, ABKCO Films and Anchor Bay Entertainment will release El Topo and The Holy Mountain for the first time on Blu-ray™ in the United States on April 26th. The films have been remastered for their high-definition debuts and will include all the bonus features that were part of their DVD release four years ago. Suggested retail price for each is $34.99 with pre-book on March 30.

The Holy Mountain will be on exhibit at MoMA PS1, an affiliate of The Museum of Modern Art, in Long Island City, New York beginning May 22, 2011. It will be shown continuously during normal museum hours in the 3rd Floor Main Gallery throughout the exhibition’s run. The Chilean-born, Paris-based Jodorowsky will be in attendance at the exhibition’s opening.

El Topo, first released theatrically in 1969, made Jodorowsky a household name with the counterculture crowd of the early 1970s. El Topo provided the template for “Midnight Movie Madness,” screening seven nights a week at midnight for seven straight months at the infamous Elgin Cinema in New York. Paradoxically, the film was thoroughly panned by the film critic of the New York Times but it was then lauded by the paper’s art critic who called it “a monumental work of filmic art.” To say that El Topo became a “cult classic” is something of an understatement in light of its surprisingly broad acceptance fueled, in part, by ringing endorsements from John Lennon and Yoko Ono that made it a commercial success in its own time.

The film conflates classic American western and avant-garde European sensibilities with Zen Buddhism and the Bible as master gunfighter and mystic El Topo (played by writer/director Jodorowsky) attempts to defeat four sharp-shooting rivals on a bizarre path to allegorical self-awareness and resurrection.

The Holy Mountain was Jodorowsky’s high budget follow-up to the worldwide success of El Topo, and took his psychedelic allegorical mastery to another level. He prepared for making the film by undergoing a psycho-spiritual boot camp, training in the spiritual arts and rituals that included a week of sleep deprivation under the supervision of a Zen master and LSD trips shepherded by a guru. Prior to shooting the film, the crew lived in isolation under Jodorowsky’s direction for a month. Visually and viscerally, the film is a masterwork that benefitted greatly from a labor intensive 2K scan restoration, which greatly enhanced The Holy Mountain’s color palate from its initial release.

When it was screened at the 1973 Cannes Film Festival, riots broke out in response to Jodorowsky’s flood of sacrilegious imagery and existential symbolism. The Holy Mountain chronicles a quest for enlightenment, pitting illusion against the truth as The Alchemist, played by the director, assembles a group of people from all walks of life to represent the planets in the solar system. Strange and provocative mystical rites to divest them of their worldly baggage ensue as they ascend the Holy Mountain to displace the immortal gods who secretly rule the universe.

About ABKCO:
ABKCO Music and Records is one of the world’s leading independent entertainment companies. It is home to critical catalog assets that include compositions and recordings by Sam Cooke, The Rolling Stones, Bobby Womack, The Animals, Herman’s Hermits, Marianne Faithfull, The Kinks as well as the Cameo Parkway masters by such artists as Chubby Checker, Bobby Rydell, The Orlons, The Dovells, ? & The Mysterians, The Tymes and Dee Dee Sharp. ABKCO’s recent releases have included the soundtracks to Wes Anderson’s acclaimed The Darjeeling Limited and Fantastic Mr. Fox, the director’s first animated feature based on Roald Dahl’s book of the same title, as well as soundtracks to Percy Jackson & The Olympians: The Lightning Thief , Middle Men and Scott Pilgrim vs. the World. ABKCO is active on many fronts including the release of critically lauded compilations and reissues from its catalog, film and commercial placement of its master recordings and music publishing properties in all media. ABKCO Films is in development of a biopic on Sam Cooke’s life. ABKCO is engaged in ongoing catalog research and development ensuring its continuing role as an innovator in the entertainment field. www.abkco.com