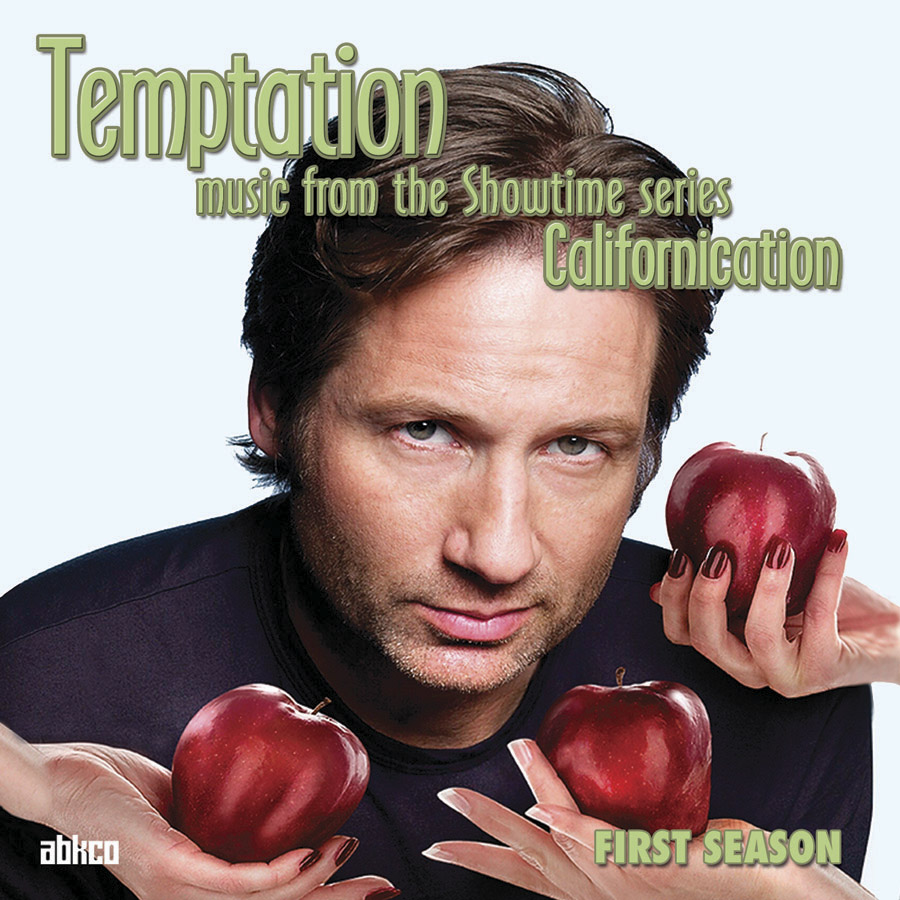 NEW YORK, May 15 – ABKCO Records which had digitally released a series of sequential “track packs” during the first season run of the hit SHOWTIME series Californication will now offer TEMPTATION: Music from the Showtime® Series Californication as a physical CD collection next month. The June 3 release includes both classic and newly recorded songs by the Rolling Stones, The Doors, Bob Dylan, Elton John, My Morning Jacket, Warren Zevon, Steve Earle and others.

On that same day, TEMPTATION: Music from the Showtime® Series Californication, a digital version of the package, including all of the original “track pack” content plus bonus tracks, will be available through all major digital retail outlets.

The critically acclaimed, cutting edge comedy stars David Duchovny who won a Golden Globe® (Best Actor, TV Series, Musical or Comedy) for his role as Hank Moody, a sexually obsessed Los Angeles writer. Additionally, Californication earned a Golden Globe nomination as Best Series/Comedy. The music heard on the series soundtrack has been selected by music supervisors Budd Carr and Nora Felder and reflects an eclectic sensibility that brings together a range of material including new versions of classic songs by well known original artists, previously unreleased music from developing artists, as well as music commissioned specifically for use in the series.

Felder notes, “We look for music that speaks for and stands behind the show’s characters, it’s not about the biggest buzz bands or the most famous artists, whatever its origin; watchers and listeners want specialized music to complement the uniqueness of this quality show.”

Jody Klein, ABKCO’s President remarked, “We’re excited by our involvement with the music heard in Californication. The music that’s been assembled for the first season’s soundtrack offers great diversity and underscores, quite literally, just how innovative the series is.”

The complete first season of Californication will be released on DVD by Showtime Networks on June 17. The DVD set includes an insert about the ABKCO soundtrack album as Showtime and ABKCO coordinate marketing forces to promote both the DVD and soundtrack album.

ABKCO Industries was founded in 1968 as an umbrella company involved in management, music publishing, film, TV and theatrical production. Later that year, Cameo Parkway Records was acquired by ABKCO, bringing the legendary Philadelphia label’s decade-long run of hits into the fold. Today, ABKCO is one of the leading independent record companies in the world. It is home to critical catalog assets that include recordings by Sam Cooke, The Rolling Stones, The Animals, Herman’s Hermits, Marianne Faithfull, The Kinks as well as the Cameo Parkway masters by such artists as Chubby Checker, Bobby Rydell, The Orlons, The Dovells, ? & The Mysterians, The Tymes and Dee Dee Sharp.
The company’s music publishing division comprises over two thousand copyrights including songs composed by Mick Jagger and Keith Richards, Sam Cooke, Bobby Womack, Ray Davies, Pete Townshend and other legendary composers.
Today ABKCO is active on many fronts including the release of critically lauded compilations and reissues from its catalogs, film and commercial placement of its master recordings and music publishing properties. It is engaged in ongoing catalog research and development ensuring its continuing role as an innovator in the music field.

Showtime Networks Inc. (SNI), a wholly-owned subsidiary of CBS Corporation, owns and operates the premium television networks SHOWTIME®, THE MOVIE CHANNEL™ and FLIX®, as well as the multiplex channels SHOWTIME® TOO™, SHOWTIME® SHOWCASE, SHOWTIME EXTREME®, SHOWTIME BEYOND®, SHOWTIME NEXT®, SHOWTIME WOMEN®, SHOWTIME FAMILYZONE® and TMC XTRA. SNI also offers SHOWTIME HD®, THE MOVIE CHANNEL HD™, SHOWTIME ON DEMAND™ and THE MOVIE CHANNEL ON DEMAND™. All SNI feeds provide enhanced sound using Dolby Digital 5.1. In addition, SNI manages and is the principal owner of Smithsonian Networks™, a venture with the Smithsonian Institution, which was formed to create networks showcasing scientific, cultural and historical programming. SNI is also the principal owner of OurChart.com LLC, provider of OurChart.com™, a social networking website featuring elements from the SHOWTIME hit series “The L Word®”. SNI markets and distributes sports and entertainment events for exhibition to subscribers on a pay-per-view basis through SHOWTIME® PPV and is an equity investor in ProElite Inc., a Mixed Martial Arts event promotion company.