For the Love of Charlie: New Music From The Rock Pioneer Charlie Gracie Out In The UK on Oct. 10, US on Nov. 8 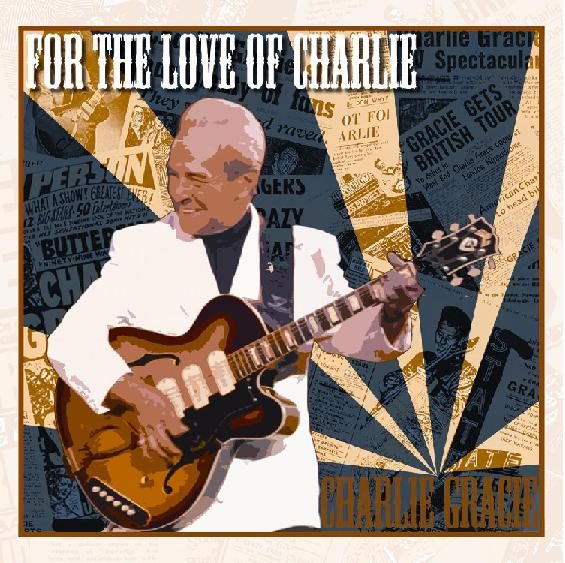 Charlie Gracie, the legendary Philadelphia-born and raised first generation rock ‘n’ roller whose 1957 hit “Butterfly” helped launch the fabled Cameo Records label, has never stopped recording and touring over the course of the past seven decades. ABKCO Records will release For The Love of Charlie, Gracie’s first album of new material in over ten years in the UK on October 10th and in the US on November 8th. The album release, both on CD and digitally, will be supported by a string of tour dates in the UK (plus one festival performance in Italy) where his popularity has long endured. Charlie’s admitted and enthusiastic admirers include Paul McCartney, who famously covered “Fabulous”, Charlie’s follow-up to “Butterfly”, fellow Beatle George Harrison as well as Eric Clapton, Jeff Beck and Van Morrison (who had Charlie tour with him in recent years).

Ten of the twelve tracks on the new album by the 75-year-old Rockabilly Hall of Famer were produced by Al Kooper who has been a fan of Charlie’s since his days as a member of The Royal Teens (“Short Shorts”). Also lending some “love” to the project is Graham Nash, who sings on the new album as does Peter Noone of the Herman’s Hermits, who named Charlie as one of the most important influences on his musical career.

Of note is the fact that the album’s packaging includes a Cameo-Parkway logo, the label having been acquired by ABKCO in the late 1960s. It’s the first appearance of the trademark on an album of new material in over 40 years. Gracie’s original hit recordings for the label have been collected on ABKCO’s The Best of Charlie Gracie 1956-1958, which has been a consistent best seller since its release five years ago.

Al Kooper, the producer/performer whose own career extends back to his early guitar playing teens and includes his work as a member of the Blues Project, founder of Blood, Sweat & Tears and the producer who discovered and recorded Lynyrd Skynyrd has long been a huge Charlie Gracie fan. Kooper commented, “Charlie was a big part of my growing up in terms of influence on me in my rockabilly period that came after my doo wop phase”. A couple of years ago, Kooper was approached by producer Quentin Jones with whom he’s since become very friendly. Jones asked him to contribute to a new Charlie Gracie album and, thereafter, sent the tracks to Kooper who noted, “All I wanted to do is make it sound as good as it could; my set-up was more accommodating than Quentin’s. I totally understood the idiom and, in fact, play in a rockabilly trio every now and then though ‘Butterfly’ and ‘Fabulous’ aren’t in the repertoire because there are some things you can’t touch”.

As the recording evolved, other players including Conan O’Brien bandleader Jimmy Vivino contributed to the work-in-progress. Charlie was touched by the efforts of Kooper, Jones, Vivino and the others who worked on the album, stating, “I am so honored and grateful to have such an extraordinary group of artists contributing their enormous talents to this album. It is as much a testament to my peers, the pioneers of rock and roll who helped lay the foundation, as it is to me. Just the same, none of us really knew our music would evolve and have the kind of influence it’s had on successive generations. To those musicians who continue to honor us through their recognition, I am eternally grateful!”

Graham Nash recalls the night many years ago when Charlie played in his native Manchester. “We had been waiting for many weeks for the show. It was a great night of this ‘new music’ and was enjoyed by all who were there. It raised and strengthened my spirits to know that I was not wrong when I sought out, strived for and finally loved this feeling, this desire, to make music, to communicate through music… to get it out…” He would, of course, go on to co-found the Hollies and, later Crosby, Stills & Nash and returned the favor to his original inspiration by providing backing vocals on “Rock ‘N’ Roll Heaven”.

For The Love of Charlie

1. All I Wanna Do Is Love You (Charlie Gracie)
Lead Guitar – Quentin Jones
Backing Vocals – Peter Noone
All other instruments – Al Kooper