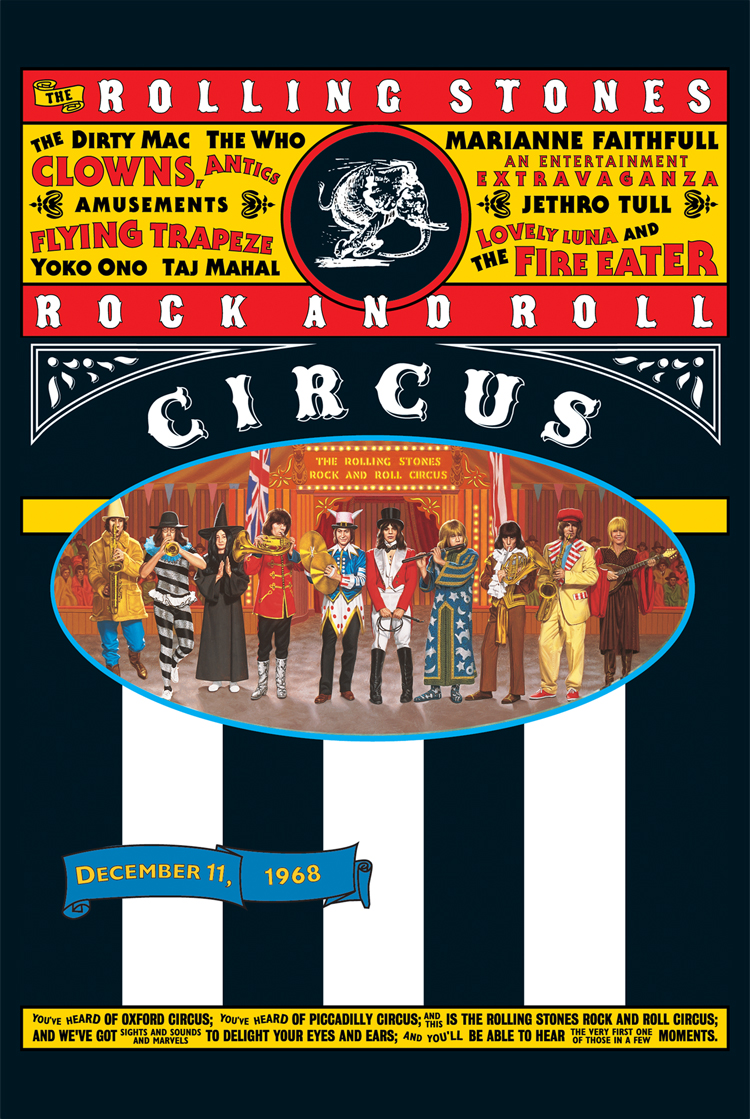 It has been called “the Holy Grail” of rock and roll: A rarely screened concert film classic, The Rolling Stones Rock and Roll Circus captures swingin’ London and the spirit of the 1960s. Directed by Michael Lindsay-Hogg, Rock and Roll Circus features the original line up of the Rolling Stones — Mick Jagger, Keith Richards, Brian Jones, Bill Wyman, and Charlie Watts — who serve as both the show’s hosts and main attraction. On Wednesday, October 26, 2011, at 7:00 p.m., Museum of the Moving Image will present a special screening, courtesy of ABKCO Films, of the fully re-mastered, legendary concert documentary, followed by a discussion and book signing with Lindsay-Hogg, whose new memoir Luck and Circumstance: A Coming of Age in Hollywood, New York and Points Beyond (Alfred A. Knopf), has just been published.

Rock and Roll Circus includes full-length musical performances by the greatest rock performers of the era, including The Who, Jethro Tull, Taj Mahal, Marianne Faithfull and Yoko Ono as well as The Dirty Mac, one of the first “super-groups”,” featuring John Lennon, Eric Clapton, Keith Richards and Mitch Mitchell of the Jimi Hendrix Experience. This was the first time John Lennon had performed before an audience without the Beatles.

The film is also one of the many great achievements of the versatile and prolific director Michael Lindsay-Hogg (The Beatles’ Let It Be, Brideshead Revisited, The Normal Heart, and many more). In Luck and Circumstance: A Coming of Age in Hollywood, New York and Points Beyond, Lindsay-Hogg takes the reader through his extraordinary life as the son of Warners’ star Geraldine Fitzgerald, boyhood encounters with the likes of Olivia de Havilland and Humprey Bogart, the secret possibility that Orson Welles was his father, and a celebrated career in the worlds of film television and music. Copies of the book will be available for purchase in the Museum Store. Also available in the store will be DVDs of The Rolling Stones Rock and Roll Circus – released by ABKCO Films.

Tickets for the screening and discussion are $15 public / $10 Museum members / Free for Silver Screen members and above. Click here to order tickets online at the Museum’s website or by calling 718.777.6800. This event is part of the Museum’s After House weeknight series, which bring dialogues with important director and actors as well preview screening to the Museum after the galleries are closed.

This event is part of the Museum’s After Hours weeknight series, which brings dialogues with important directors and actors as well as preview screenings to the Museum after the galleries are closed.

The Museum of the Moving Image WebsiteAmazon