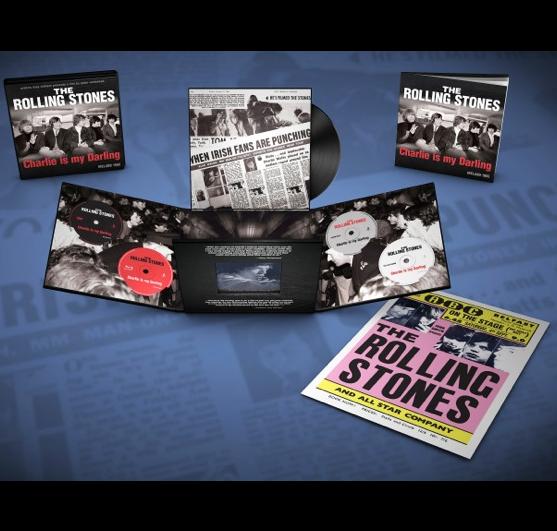 ABKCO Films is proud to join in the celebration of The Rolling Stones 50th Anniversary by announcing exclusive details of the release of the legendary, but never officially released film, The Rolling Stones Charlie is my Darling – Ireland 1965, the cinematic debut of the band. This new cut of the film features newly discovered, never-before-seen or heard performances and will be released in Super Deluxe Box Set, Blu-ray and DVD configurations worldwide on November 6 (or 5 in the world excluding N/A).

The Rolling Stones Charlie is my Darling – Ireland 1965 was shot on a quick weekend tour of Ireland just weeks after “(I Can’t Get No) Satisfaction” hit # 1 on the charts and became the international anthem for an entire generation. Charlie is my Darling is an intimate, behind-the-scenes diary of life on the road with the young Rolling Stones featuring the first professionally filmed concert performances of the band’s long and storied touring career, documenting the early frenzy of their fans and the riots their live performances incited.

Charlie is my Darling showcases dramatic concert footage – including electrifying performances of “The Last Time,” “Time Is On My Side” and the first ever concert performance of the Stones counterculture classic, “(I Can’t Get No) Satisfaction.” Candid, off-the-cuff interviews are juxtaposed with revealing, comical scenes of the band goofing around with each other. It’s also an insider’s glimpse into the band’s developing musical style by blending blues, R&B and rock-n-roll riffs, and the film captures the spark about to combust into The World’s Greatest Rock and Roll Band.

The 1965 version of Charlie is my Darling was produced by Stones’ manager/producer Andrew Loog Oldham who enlisted director Peter Whitehead to travel with the group and film them as “(I Can’t Get No) Satisfaction” rocketed the band to the pinnacle of the U.S. and U.K. charts. Whitehead, who would later capture “swinging London” in Tonite Let’s All Make Love in London, crafted a 35-minute version of the film (director’s cut) that would surface, from time to time over the years, usually seen with grainy visuals and out of phase music. Later, Oldham put together a 50-minute producer’s cut that was first seen in the 1980s. As noted, both the director’s and producer’s cut are part of the DVD, Blu-ray and Super Deluxe Charlie is my Darling release.

The GRAMMY® winning team of producer Robin Klein and director Mick Gochanaur developed the new 65 minute version after researching and locating additional film footage shot by Whitehead and uncovering a source of first generation audio recordings of the band’s concert performances. Painstaking work was done on restoring the footage to come up with the new film that offers a coherent narrative and gives the viewer unprecedented access to the Rolling Stones’ original line-up – Mick Jagger, Keith Richards, Charlie Watts, Brian Jones and Bill Wyman –on stage live and captured, literally, in trains, planes and automobiles as well as backstage and in smoky hotel rooms where they candidly discuss their future. Never-before-seen footage of the band’s early songwriting process is also included as motel rooms host impromptu songwriting sessions and familiar classics are heard in their infancy as riff and lyric are united.

The Rolling Stones Charlie is my Darling – Ireland 1965 Super Deluxe Box Set includes both DVD and Blu-ray discs that incorporate the new 2012 version of the film as well as the director’s cut and producer’s cut, plus significant unseen additional performance and other footage shot in Dublin and Belfast in September of 1965, bonus content, two audio CDs, one of which is the film’s soundtrack album and the other a compilation of 13 live recordings the band made over the course of their 1965 UK tour. A 10” vinyl record of the live material is also part of the package, as well as a replica poster heralding the September 4, 1965 date they played in Belfast. The Super Deluxe box is housed in an ingeniously designed luxurious “soft touch” package, each featuring one of over 200 Limited Edition numbered and enlarged cells randomly inserted from the film. There is also a stunning 42 page Collector’s Edition hardcover book that includes 14 never before seen, and painstakingly restored exclusive photographs, including the key art, of the band from the Irish Photo Archive/Lensmen Photo Archive as well as color photos taken by Marc Sharatt, the Stones’ tour photographer. Reprints of vintage newspaper and magazine articles from the UK and Irish press that offer accounts of the dates and attendant mayhem are included as are essays from American rock journalist and Rolling Stone Magazine staffer David Fricke and GRAMMY® and Academy Award® winning Irish singer/songwriter/actor Glen Hansard. A featured recollection from Reverend Donor Macneice, who was recently located living in Thailand and whose attendance at the ’65 Belfast show nearly cost him his job after he was spotted on the local news is also part of the package.

Both individual Blu-ray and DVD editions of the package mirror the discs featured in the Super Deluxe Box comprising the 2012 version, the director’s cut and the producer’s cut. Simultaneously, there will also be a digital-only release of the 2012 edition of The Rolling Stones Charlie is my Darling – Ireland 1965.

The world premiere of The Rolling Stones Charlie is my Darling – Ireland 1965 will take place this Friday, September 29 at the 50th New York Film Festival with Andrew Loog Oldham in attendance. An encore screening is set for Wednesday, October 3. Additionally, Oldham and Steven Van Zandt will also host a screening and Q&A at New York’s 92 Street Y on Friday, October 5.

November 2012 broadcast premieres are being scheduled for the US and the UK, as well as worldwide theatrical screenings.