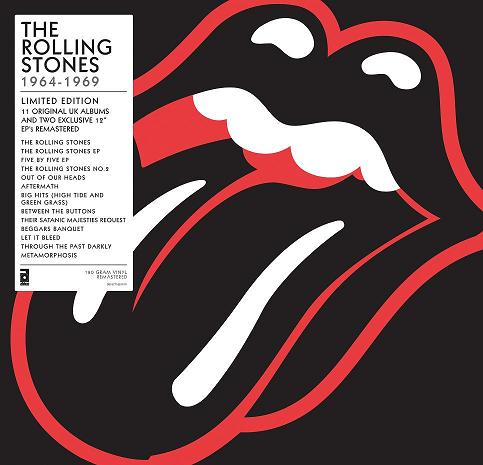 For the very first time in history the “World’s Greatest Rock ‘n’ Roll Band,” ABKCO Records and Universal Music Group have joined forces to offer two vinyl box set collections spanning over 40 years of the Rolling Stones’ career. The box sets include 23 original studio albums, two “Big Hits” collections as well as two rare EPs. They will be released worldwide on November 22. The Rolling Stones 1964-1969 and The Rolling Stones 1971-2005 Vinyl Box Sets offer the consumer a wealth of great Rolling Stones music, much of which hasn’t been available on vinyl for a considerable period of time.

The first five titles in the set are presented in their original mono format affording, for the first time in years, an opportunity for Stones fans to enjoy remastered versions of the tracks “I Can’t Be Satisfied,” “Time Is On My Side” (Version 2) and “Down the Road Apiece” as originally released. Through the Past, Darkly (Big Hits Vol. 2) is included with its original octagonal cover and artwork intact. Metamorphosis is also included in the set; the album was first released in 1975 but is wholly comprised of tracks recorded from the early-to-late sixties. The inclusion of the band’s original two “Big Hits” collections was mandated by the fact that U.K. album releases in that era most often did not include contemporaneously released hit singles.

The world really was the Rolling Stones’ oyster in the seventies, as their escapades made headlines around the world from the French Riviera to Switzerland and via the U.S. and Canada. They performed groundbreaking concerts in arenas and moved effortlessly into open-air stadiums. They stuck their collective tongue out at the British establishment and became citizens of the world.

They set up their own label and made the most of their new-found artistic freedom and, most importantly, they issued a series of definitive studio albums: Sticky Fingers, Exile On Main Street, Goats Head Soup, It’s Only Rock ’n’ Roll, Black And Blue and Some Girls. They partied at Studio 54, came up with dance-floor hits “Miss You” and “Emotional Rescue,” and recorded in Paris, Nassau, Jamaica and New York.

Throughout the next two decades they filmed with Scorsese, recorded with Don Was and released further groundbreaking albums–Voodoo Lounge and Bridges To Babylon, right up to 2005’s triumphant A Bigger Bang.

Fans now get a chance to rediscover many of their past favorites and unearth some forgotten gems along the way too …all re-mastered and sounding better than ever.

The two volumes, a compendium of the band’s U.K.-released studio recordings, will be marketed jointly by ABKCO and UMG and span the band’s output from the dawn of their recording career in early 1964 with the release of their debut LP The Rolling Stones, through to A Bigger Bang, originally released in 2005. Pressings in The Rolling Stones 1964-1969 and The Rolling Stones 1971-2005 Vinyl Box Sets are 180-gram virgin heavyweight vinyl and are part of the much lauded Back-to-Black classic vinyl reissue series.

Jody Klein, ABKCO Music and Records CEO, remarked, “With the current marketplace resurgence of vinyl, these collections are certain to delight both long-standing Stones fans as well as contemporary vinyl devotees. The quality of the pressings and the care with which these historic releases have been remastered is breathtaking.”

“We are honored to continue our campaign to preserve the Stones legacy with the highest quality sets for fans to enjoy,” added Bruce Resnikoff, President/CEO, Universal Music Enterprises (UMe).

Andrew Kronfeld, Universal Music Group International’s Executive VP, International Marketing, said, “Vinyl was the Rolling Stones’ accomplice from day one, so this is the way to hear the world’s greatest rock ’n’ roll band. There’s nothing else to say… just listen.”