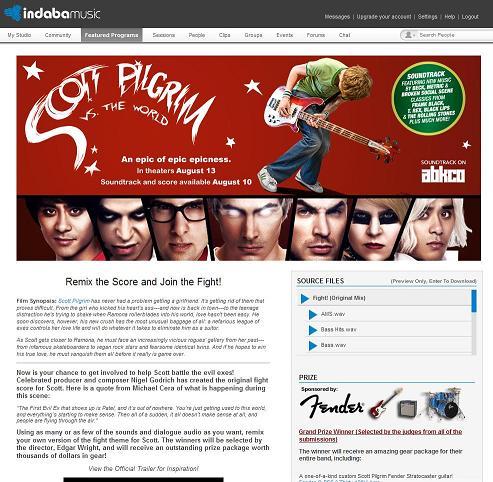 ABKCO Records will release both the soundtrack (for which Godrich served as executive producer) and score albums on August 10th in advance of the Edgar Wright- (Shaun of the Dead, Hot Fuzz) directed film’s national theatrical debut on August 13th. Michael Cera (Juno) plays the title character in Scott Pilgrim vs. the World, a bass guitarist for totally average garage band Sex Bob-Omb, the 22-year-old has just met the girl of his dreams…literally. The only catch to winning Ramona Flowers (Mary Elizabeth Winstead) is battling her seven evil exes that are coming to kill him.

The Scott Pilgrim vs. the World – Score Remix Contest, launched last week, has already received tremendous response from mixologists around the globe, with more than 1,500 musicians entering in the first seven days of the competition. Entrants are in competition to win a full band’s set of Fender equipment (see below), with the runners-up winning additional Fender gear. Submissions will be accepted through August 16th, to be followed by a two-week open vote. After the vote, Edgar Wright and Dan the Automator will handpick the Grand Prize Winner, who will also be given the opportunity to participate in a one-on-one Indaba Music collaboration with Dan the Automator.

Dan stated, “I’m really looking forward to working with the Indaba community of musicians on the SPVTW score contest. The scene from the film in which “Fight” is used is when Patel shows up, Ramona Flowers’ first evil ex, to battle Scott Pilgrim. Just as you’re getting used to Pilgrim’s world and everything’s starts to make sense — all hell breaks loose!” Contestants are able to use as many or as few of the sounds and dialogue audio from the film as they wish to create a remixed version of the “Fight” theme. Dad adds, “I’m sure we’re gonna tap into some new and exciting talent. Nigel’s score is a gem and there are some really fun elements to work with, I can’t wait to get started.”

Dan the Automator, who collaborated with Godrich on the tracks “Slick (Patel’s Song)” and “Ninja Ninja Revolution” on the score album, is a San Francisco-based hip-hop producer whose elaborate conceptual projects, wildly imaginative productions and offbeat sense of humor have made him one of the leading figures on the underground alternative rap scene. His work on such diverse projects as the Gorillaz, Rapper’s Delight Remix and The Charlie Parker Remix Project make him an Indaba community favorite.

The winner will also have the opportunity to collaborate with Dan the Automator through Indaba!

2nd Place (selected by the judges from all of the submissions) will receive:
-A one-of-a-kind custom Scott Pilgrim Fender Stratocaster guitar!
-SWR Working Pro 15 120V Amp