The Devil All The Time Original Netflix Soundtrack Now On Vinyl 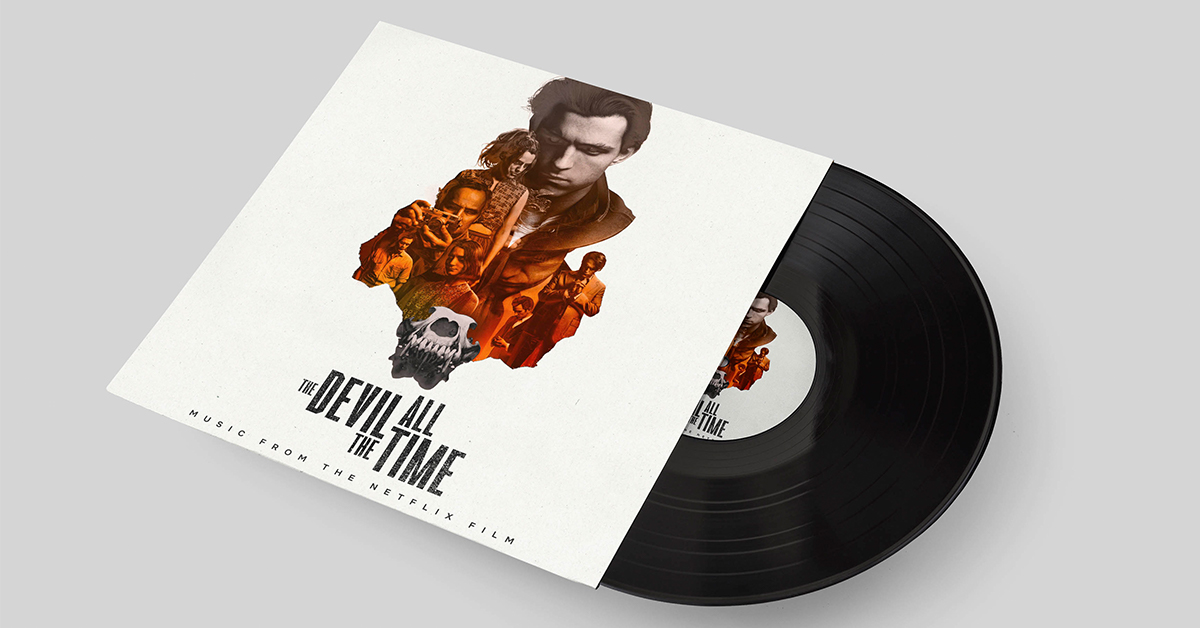 The Devil All The Time (Music From The Netflix Film) on vinyl LP and CD. The film, a fall 2020 release from Netflix, has been highly acclaimed. Reviewers have cited its evocative soundtrack as a key element in advancing the Midwestern Gothic storyline. It spans two decades during which sinister characters converge around young Arvin Russell (Tom Holland) as he fights the evil forces that threaten him and everything he loves.  Writing in Men’s Health, Evan Romano noted, “Between original music and curated classics, The Devil All The Time‘s music helps to perfectly transport viewers to the early-mid 1950s setting where all our action takes place.”

The Devil All The Time also stars Bill Skarsgård, Riley Keough, Jason Clarke, Sebastian Stan, Haley Bennett, Harry Melling, Eliza Scanlan with Mila Wasikowska and Robert Pattinson. Celebrated Americana music artist Pokey LaFarge is also in the cast and is heard on the soundtrack performing “Banks of The Ohio” as well as “Washed In The Blood” with fellow cast member Harry Melling.

Click to Purchase LP, CD, and Stream The Devil All The Time (Music From The Netflix Film)

Randall Poster,  a producer of The Devil All The Time,  is also a highly acclaimed music supervisor known for his work with Wes Anderson and Martin Scorsese, as well as a two time Grammy winner. He commented, “Music helps define these characters and an urgent reality. In this film, music is an effective counterpoint to some of the more suspenseful moments.  I love country music and am always excited to ‘step on the gravel road’ and use it when I can.  I’m glad Pokey got the part and his ‘Banks of The Ohio’ reinforces the film’s geography.  We thought about how to use music to help people understand that we are traveling from 1946 to 1965 in a way that doesn’t feel like it’s self-conscious and doesn’t jump out at the viewer.  Music is an organic part of the film, used to set time and place and to capture the spiritual ground of it.”

The Devil All The Time, directed by Antonio Campos (Christine, Simon Killer), is set in Ohio and West Virginia during the period between the end of World War II and the mid-1960s. The film’s screenplay was written by Antonio Campos and Paulo Campos, adapted from Donald Ray Pollock’s award-winning novel.  The film’s producers include Jake Gyllenhaal, Riva Marker and the aforementioned Randall Poster who, along with Meghan Currier, served as music supervisors.  Author Donald Ray Pollock also provides the film’s narration. John Defore in The Hollywood Reporter commented, “Aside from strong performances across the board, credit should be given for a predictably excellent period soundtrack chosen by music supervisors Randall Poster and Meghan Currier. Setting pared-down spirituals alongside underexposed radio hits of the day, they help Devil root itself in the real but fictional-sounding hamlets of Knockemstiff, Ohio, and Coal Creek, West Virginia.”

Key portions of the film’s score, written by Saunder Jurriaans and Danny Bensi who worked with Antonio Campos on both Christine and Simon Killer, are included on the album. The pair are also known for work on Ozark and The OA, both Netflix series.  Alex Rose in Cult MTL wrote, “By forgoing the clichés of soundtracking a period that suggest the best choice for any scene is the most obviously period-associated one, Campos creates a very particular atmosphere.”

Pokey LaFarge was previously seen in The Lone Ranger and portrayed country music legend Hank Snow on the CMT series Sun Records.  Since his recording debut in 2006, he has released a total of nine full-length albums and has twice won the Independent Music Award for Best Americana Album and, in 2017, won the Ameripolitan Music Award for Best Western Swing Album.  LaFarge was encouraged to audition for the role of Theodore in The Devil All The Time by Randall Poster, who had previously incorporated his music in the HBO series Boardwalk Empire for which he served as music supervisor.

Numerous classic country recordings are featured on The Devil All The Time (Music From The Netflix Film), including the traditional folk song “Little Bessie” by bluegrass legends The Stanley Brothers, Billy Walker’s original 1961 country hit version of Willie Nelson’s “Funny How Time Slips Away” and the 1946 King Records recording of “Hillbilly Boogie” by the Delmore Brothers. Other songs featured include “The Three Bells,” an adaptation of the French language hit “Les Trois Cloches” by The Browns that went to #1 in 1956 and “Put It Off Until Tomorrow,” by Bill Phillips. The song was written by a very young Dolly Parton who contributed harmony vocals to the 1966 Top 10 country hit.  Also part of the soundtrack album are Ferlin Husky’s ground-breaking country gospel smash, “Wings of A Dove” that spent ten weeks at the top of Billboard’s country singles chart in 1960 and “Honeycomb” by Jimmie Rodgers. That song went to #1 on both the pop and R&B charts in 1957 and was a top 10 country single. “Young Love” by Country Music Hall of Famer Sonny James stayed in the #1 position on Billboard’s country singles chart for nine straight weeks in 1957 and is part of the album.  Less well known but equally evocative is “He Says The Same Things To Me” by Skeeter Davis, as produced by Chet Atkins. The single was her follow-up to “I Can’t Stay Mad At You” and was a top 20 country hit in 1964.  The “Bakersfield Sound” is in evidence on the album with Wyn Stewart’s “Wishful Thinking” that hit the top 5 of the Billboard country chart in 1960.

The headline for Bobby’s Moore’s piece on The Devil All the Time soundtrack in Wide Open Country is a brilliant summation, to wit: “NETFLIX’S ‘THE DEVIL ALL THE TIME’ HAS AN INCREDIBLE COUNTRY MUSIC SOUNDTRACK.” Screen Rant’s Meah Peers opined, “The soundtrack is a perfect blend of gospel and country tunes.. each song is so devastatingly in-tune with the plot…”