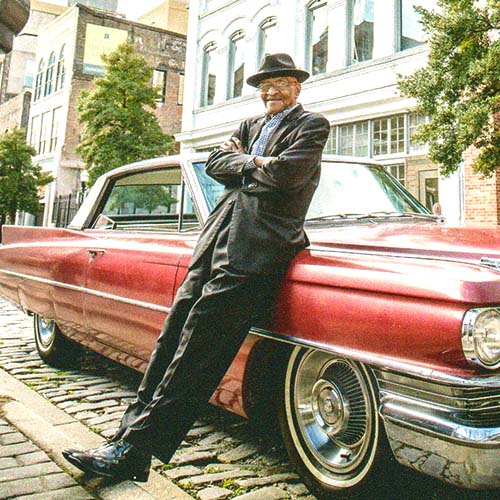 Roscoe Robinson is one of the last of the great long serving ‘shout singers’.

He was born in Dermott, Arkansas in 1928 to a pastor father and a mother who sang in church choirs with his siblings. Roscoe recorded as a gospel solo artist in the 1950’s with Trumpet Records and sang in groups including the Five Trumpets, the Highway QC’s, where he formed a great friendship with Sam Cooke, and the Fairfield Four. He went on to work with the Blind Boys of Alabama and the Blind Boys of Mississippi, replacing the latter’s group leader Archie Brownlee following his death in 1960.

While he was singing with the Blind Boys, Roscoe tipped Sam Cooke to the Womacks suggesting he bring them on to his label. Sam took his advice and signed the Womack Brothers to his SAR label in 1961. Robinson wrote “Somewhere There’s A God” which was recorded by the Womack Bros. The secularized version, “Somewhere There’s A Girl” was recorded by the brothers as The Valentinos and also by Sam Cooke.

Robinson returned to his gospel roots in the 1980s, recording “High on Jesus” for Savoy, followed by a stint with the Gerri label, where he released “So Called Friends” in 2003 and another gospel album, “Gospel Stroll” two years later.

Just before his 90th birthday in May 2018, Roscoe went back in to the studios in Birmingham, AL and Memphis, TN to record and produce 2 new tracks – the spiritual “Turn Right and Go Straight” and the secular “We Got A Good Thing Goin”.