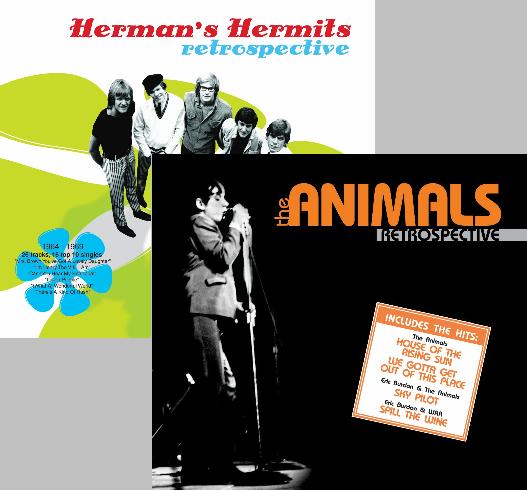 ABKCO Records, which over the past two years has released no fewer than 28 Hybrid SACD titles, has set July 20th as the date to bring the count to an even 30 with the release of The Animals Retrospective and Herman’s Hermits Retrospective, in celebration of the 40th anniversary of the groups’ chart debuts. Like the The Rolling Stones Remastered Series and The Sam Cooke Remastered Collection, the new discs are fully compatible with SACD and standard CD playback units, with two layers of digital encoding.

The Animals Retrospective offers 22 hit tracks including “House of The Rising Sun,” “Don’t Let Me Be Misunderstood,” “San Franciscan Nights,” “Sky Pilot,” “Spill The Wine” and the original U.S. version of “We Gotta Get Out of This Place,” that has not been available for more than a decade. This compendium is the most comprehensive single disc retrospective of Burdon’s work as a member of the Animals, as leader of Eric Burdon and The Animals and as the centerpiece of Eric Burdon and War. This collection features no fewer than ten top 15 chart singles.

Herman’s Hermits Retrospective, similarly, traces that band’s chart run over the course of 26 tracks, including sixteen top 10 chart singles including “Mrs. Brown You’ve Got A Lovely Daughter,” “Henry The VIII, I Am,” “Can’t You Hear My Heartbeat,” “Listen People,” the band’s version of Sam Cooke’s classic “Wonderful World,” as well as “There’s A Kind Of Hush.”

As with all of ABKCO’s SACD releases, The Animals and Herman’s Hermits discs benefit from Direct Stream Digital (DSD) recording technology. DSD’s simplified mechanism for recording and playback results in a frequency response of over 100kHz and a dynamic range over 120dBacross the audible frequency range. DSD increases the resolution of music by more closely following the original wave form of the music, which results in music reproduction that is remarkably pure and faithful to the original.

ABKCO’s Rolling Stones Remastered Series launched in the summer of 2002 was the opening salvo in the company’s ongoing SACD hybrid release initiative. With a total of 22 titles, it was the most comprehensive one time single artist release program in industry history and part of what has become the most ambitious release program since the inception of the SACD format.

Last year, ABKCO followed with the Sam Cooke Remastered Collection, five new titles from the legendary star who defined soul music for all time, that included the magnificent 5.1 surround sound version of Sam Cooke At The Copa. The Copa recording was recorded almost exactly 40 years ago and, upon hearing the 5.1 version for the first time, L.C. Cooke, Sam’s brother was moved to tears as he exclaimed, “Sam is here, right here in this room!”

ABKCO added to its Rolling Stones Series with the “Sympathy For The Devil Remix,” a collection of seven versions of the classic Rolling Stones track including remixes by The Neptunes and Fatboy Slim as well as a breathtaking 5.1 surround sound version of the original. It went to #1 on Billboard’s Singles Sales Chart within two weeks of release.

The company’s early commitment to the SACD format can be traced back to the aggressive release program which underscored that commitment. It’s worth noting that in 2002, 15% of all Hybrid SACD releases were from ABKCO Records. This is a truly remarkable feat when you consider that ABKCO is an independent record company in competition with the ‘big five’ majors.”

ABKCO’s new Animals and Herman’s Hermits SACD hybrids, like the Rolling Stones and Sam Cooke titles previously released should find a ready base of consumers interested in collecting true-to-the-original versions of rock classics offered in a format that is inclusive – compatible with both standard CD players and SACD machines. ABKCO’s continuing policy is getting great restorations out of the audiophile ghetto and into the mainstream to be enjoyed by the broadest possible spectrum of music fans.