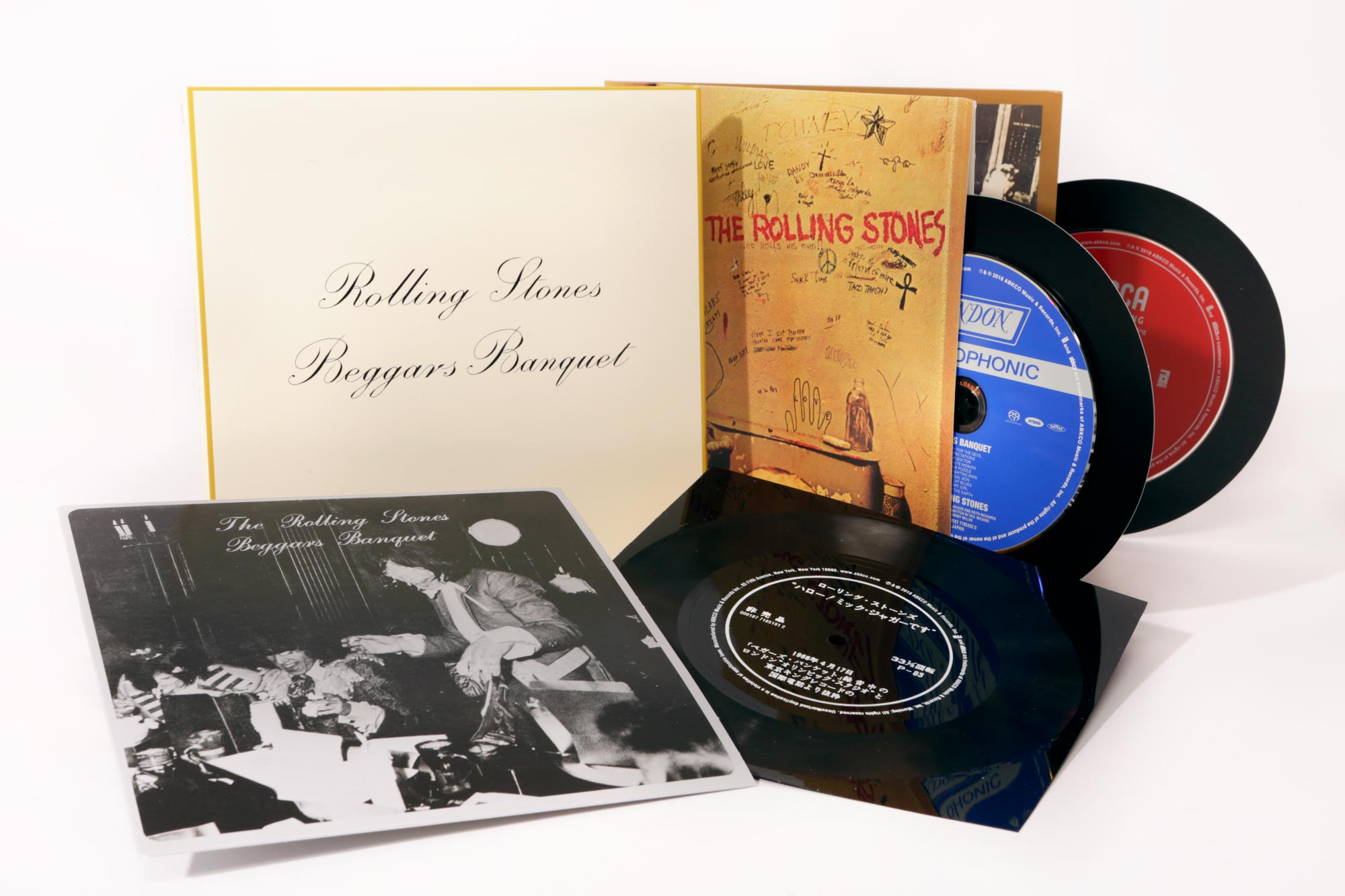 The SACD package itself is designed to look like a miniaturized replica of the 12” gatefold double-vinyl edition, sized to be a convenient 7” gatefold, and contain 2 hybrid SACDs, a flexi disc and expanded packaging elements exclusive to this edition. This bespoke packaging is manufactured in Japan and is of the highest quality to match the SACD audio. Special elements of the package include: replica packshots of two Japanese 7” single picture sleeves (“Jumpin’ Jack Flash” and “Street Fighting Man”) and both versions of the Beggars Banquet sleeve art are included. This SACD set is a Japanese release, which will be imported into North America in a limited quantity.

Recorded between March and July of 1968 at Olympic Sound Studios in London, mixed at Sunset Sound in Los Angeles, Beggars Banquet was the first Stones album produced by Jimmy Miller, and marks the start of what is considered their most prolific album era. Beggars Banquet has a special place in the history of the band, as it is the final album completed with the original lineup of Mick Jagger, Keith Richards, Brian Jones, Billy Wyman and Charlie Watts. During the year of release, Jann Wenner of Rolling Stone declared it “the best record they have yet done” and “an achievement of significance in both lyrics and music.”

Each of these hybrid layered discs includes the entire musical content in both Super Audio CD (SACD) as well as standard CD, providing for complete backward and forward hardware compatibility. The discs will play flawlessly on any SACD compatible or standard CD player. In an SACD player, the laser pick-up automatically reads the SACD layer in Direct Strem Digital (DSD) format, while a standard CD player’s laser pick-up will automatically read through the SACD layer to the CD layer in Pulse Code Modulation (PCM) format. Recently remastered by eleven-time Grammy winner Bob Ludwig at Gateway Mastering Studios, the SACD audio is the exact product of his work, with no loss of fidelity whatsoever.

The flexi disc captures a telephone interview between Mick Jagger and a representative of King Records in Tokyo, the distributor of London Records in Japan. The rare artifact’s title translated to “Hello, This Is Mick Jagger!” LONDON to TOKYO April 17, 1968” has been resotred and reissued on flexi disc with a picture sleeve lovingly restored to look just like the original. The flexi is included in the 50th Anniversary Limited Edition SACD package (as well as vinyl package) worldwide, making it available for the first time outside Japan. A mirthful moment in the exchange captured over the telephone, halfway around the world, while the band was busy recording the yet-unnamed album Beggars Banquet in Olympic Studios, Jagger was asked “What do you think is the future direction of your music?” And with no hesitation, he responded “Sideways.”

The original intended album cover art for Beggars Banquet was initially rejected both by London Records, the band’s U.S. label as well as Decca, their UK label. The Michael Vosse photograph of a vandalized restroom wall (Jagger and Richards provided the graffiti, the restroom was inside a Porsche dealership) was deemed offensive, possibly because the top of an open toilet is captured in the shot. The replacement cover was simply the band name and album title written in the style of a wedding invitation, and remained that way for several years before the intended bathroom photo art finally gained its rightful place on the cover. Beggars Banquet (50th Anniversary Edition) pays tribute to both, as the package will be housed with the Vosse image, with an overwrap of the “inoffensive” wedding RSVP invitation art.