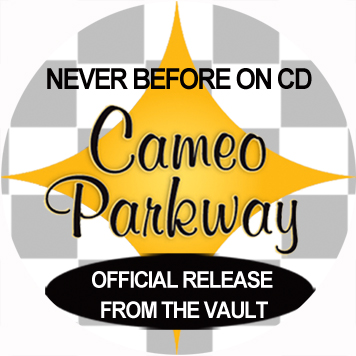 On June 22, 2010, Collectors’ Choice Music in conjunction with ABKCO Music & Records will begin a rollout of six reissues and compilations from the legendary Cameo and Parkway Records masters. The initial six CDs, including four twofers, are Rawhide’s Clint Eastwood Sings Cowboy Favorites, Bobby Rydell Salutes The Great Ones/Rydell at the Copa, Chubby Checker’s It’s Pony Time/Let’s Twist Again, The Orlons’ The Wah-Watusi/South Street, Terry Knight And The Pack/Reflections plus the compilation Remember Me Baby: Cameo Parkway Vocal Groups Vol. 1 which features The Lydells, The Dovells, The Tymes, Lee Andrews, Billy And The Essentials and more.

For some time ABKCO had been looking for the right team with whom to delve into its vaults to create an ongoing Cameo Parkway reissue program. ABKCO found the right mix in Collectors’ Choice Music and have entered into an exclusive arrangement, ensuring that a flow of reissues and ompilations will be available over the next few years. All releases will be curated by Teri Landi, ABKCO’s resident engineer and catalog archivist, and annotated by respected music journalists.

Jody Klein, CEO of ABKCO Music & Records commented, “We are delighted to have Collectors’ Choice Music onboard for these releases of great historical relevance. Their expertise in this area will ensure that the music that made Cameo-Parkway such a cultural touchstone will be enjoyed by music fans who have long awaited these collections.”

Much of the material has not been available since its original release on vinyl some 45-50 years ago. Both companies have approached these reissues with careful A&R, annotation, package design and sound engineering. Said Gordon Anderson, Sr. VP of Collectors’ Choice, “The opportunity for our company to release this material represents the culmination of a career-long dream for me, and a fervently-held dream for thousands of our Collectors’ Choice Music customers.”

Founded by Bernie Lowe and Kal Mann in December 1956, Philadelphia-based Cameo-Parkway was one of the great American indie labels during the late ’50s and ’60s. It was home to big pop-rock and R&B stars like Bobby Rydell, Chubby Checker and The Orlons, as well as to all manner of styles and artists both famous and obscure. It also represents the last great, largely untapped repository of vintage pop music from the rock ’n’ roll era.

It has been argued that popular culture was forever changed by the impact of Cameo-Parkway hits. Cameo-Parkway was one of America’s leading independent labels during the era that preceded the British invasion, offering a breathtaking range of pop, soul, rock, novelty and dance records that have continued to resonate with fans over the past five decades. The label’s biggest claim to fame is the string of dance craze hits that followed in the wake of “The Twist.” These included “Mashed Potato Time,” “The Wah-Watusi,” “Bristol Stomp,” “Do the Bird,” “Hully Gully Baby,” “Pony Time,” “The 81,” “Limbo Rock” and, of course, “Let’s Twist Again.”

Beyond the dance songs — most of which originated in Philadelphia — Cameo-Parkway issued garage rock classics from the Midwest including ? And The Mysterians’ “96 Tears” as well as early tracks by Detroit’s Bob Seger, The Rationals and Terry Knight And The Pack. The label even embraced the British invasion, releasing sides by The Kinks and Screaming Lord Sutch. Soul played a significant role with singles by The Tymes, Patti LaBelle And Her Bluebells, Frankie Beverly And The Butlers, The Five Stairsteps, and Bunny Sigler. Beyond those, Cameo was the label home of Bobby Rydell, who transformed from “swingin’ pop idol” to a mature vocalist and was accepted by both teen and adult audiences with such hits as “Wild One,” “Kissin’ Time” and more adult fare such as “Volare” and “Sway.”

• Bobby Rydell — Bobby Rydell Salutes The Great Ones/Rydell at the Copa. These two 1961 albums — presented here in their original stereo mixes — represented an effort by Rydell to move beyond the limitations of his teen idol persona. The title of Rydell’s Cameo LP, Bobby Rydell Salutes The Great Ones, works on two levels. It is an early tribute to the performers the young singer admired all his life, as indicated by the little caricatures of Al Jolson, Bing Crosby and Frank Sinatra in the upper corner of the LP’s cover, and the “great ones” in the title refers to songs from the Great American Songbook such as “Mammy,” “That Old Black Magic” and “All of You.” By recording a live album at the Copa, Rydell was following a well-trodden trail left by other pop male vocalists like Bobby Darin and Paul Anka. Jim Ritz contributed liner notes.

• Chubby Checker — It’s Pony Time/Let’s Twist Again. This twofer includes two albums from the height of the Chubby Checker twist phenomenon that he and Cameo-Parkway had spawned, virtually ruling the music charts in 1960 and 1961. The first album’s title track, “Pony Time,” went to #1, his only chart-topper besides “The Twist,” while Let’s Twist Again, his fourth album, hit #11, shortly followed by three Top 10 albums in a row. Also featured here are “We Like Birdland,” “The Watusi,” The Hully Gully,” “I Could Have Danced All Night,” “Let’s Twist Again” and more. Jim Ritz penned the liner notes.

• The Orlons — The Wah-Watusi/South Street. Discovered by high school classmate and future Cameo labelmate Len Barry, The Orlons (Shirley Brickley, Marlena Davis, Rosetta Hightower and Stephen Caldwell) were one of Cameo-Parkway’s most popular vocal groups and certainly the label’s top girl group. This twofer presents their only two charting albums from 1962 and ’63 respectively, and both featuring Top 5 title tracks. Heard here in their original pristine mono with notes by Gene Sculatti that contain quotes from Caldwell (he of the ultra-low “frog” voice), this reissue contains the title hits plus “Dedicated To The One I Love,” “Tonight,” “Cement Mixer” and more.

• Terry Knight And The Pack — Terry Knight And The Pack/Reflections. Although Cameo-Parkway was best known for rock ’n’ roll, pop and R&B, these albums (originally released on Cameo’s Lucky Eleven imprint) illustrate the label’s embrace of Midwestern rock. Flint, Michigan’s Knight And The Pack were a garage band with many regional hits that never broke nationally; they might have become stars but for the fact that band members Mark Farner and Don Brewer left to form Grand Funk Railroad, with Knight producing. In his liner notes, Jeff Tamarkin tells the story of their 1966-67 fuzz-laced sounds featured in “Numbers,” “You’re a Better Man Than I,” “The Lovin’ Kind,” “One Monkey Don’t Stop No Show,” “Dimestore Debutante” and others.

• Clint Eastwood — Rawhide’s Clint Eastwood Sings Cowboy Favorites. Oscar-winning actor Clint Eastwood has demonstrated a musical streak throughout his acting and directing career, and this 1963 album catches him at the beginning. Fresh from his success on the TV series Rawhide, he croons (and quite convincingly so) a collection of cowboy favorites. The set includes the 1962 single “Rowdy” b/w “Cowboy Wedding Song,” as well as “San Antonio Rose,” Bouquet of Roses,” “Along the Santa Fe Trail,” “The Last Roundup,” “Sierra, Nevada” and more. Jim Ritz contributed liner notes.

• Remember Me Baby: Cameo Parkway Vocal Groups Vol. 1. There are collectors and there are doo-wop collectors, which is why Collectors’ Choice devoted its very first compilation in the series to the vocal groups whose recordings defined Cameo-Parkway during its earliest years. Heard here are The Gainors’ “You Must Be An Angel,” Billy And The Essentials’ “Remember Me Baby,” and never before released tracks by The Dovells and The Tymes, “Short On Bread” and “Did You Ever Get My Letter?,” respectively. Also featured are rare tracks from The Anglos, The Defenders, The Exceptions, The Expressions, The Gleems, Pookie Hudson And The Spaniels, The Impacs, The Rays, Rick And The Masters, The Sequins, The Skyliners and The Turbans — 24 tracks in all. Annotated by Ed Osborne.