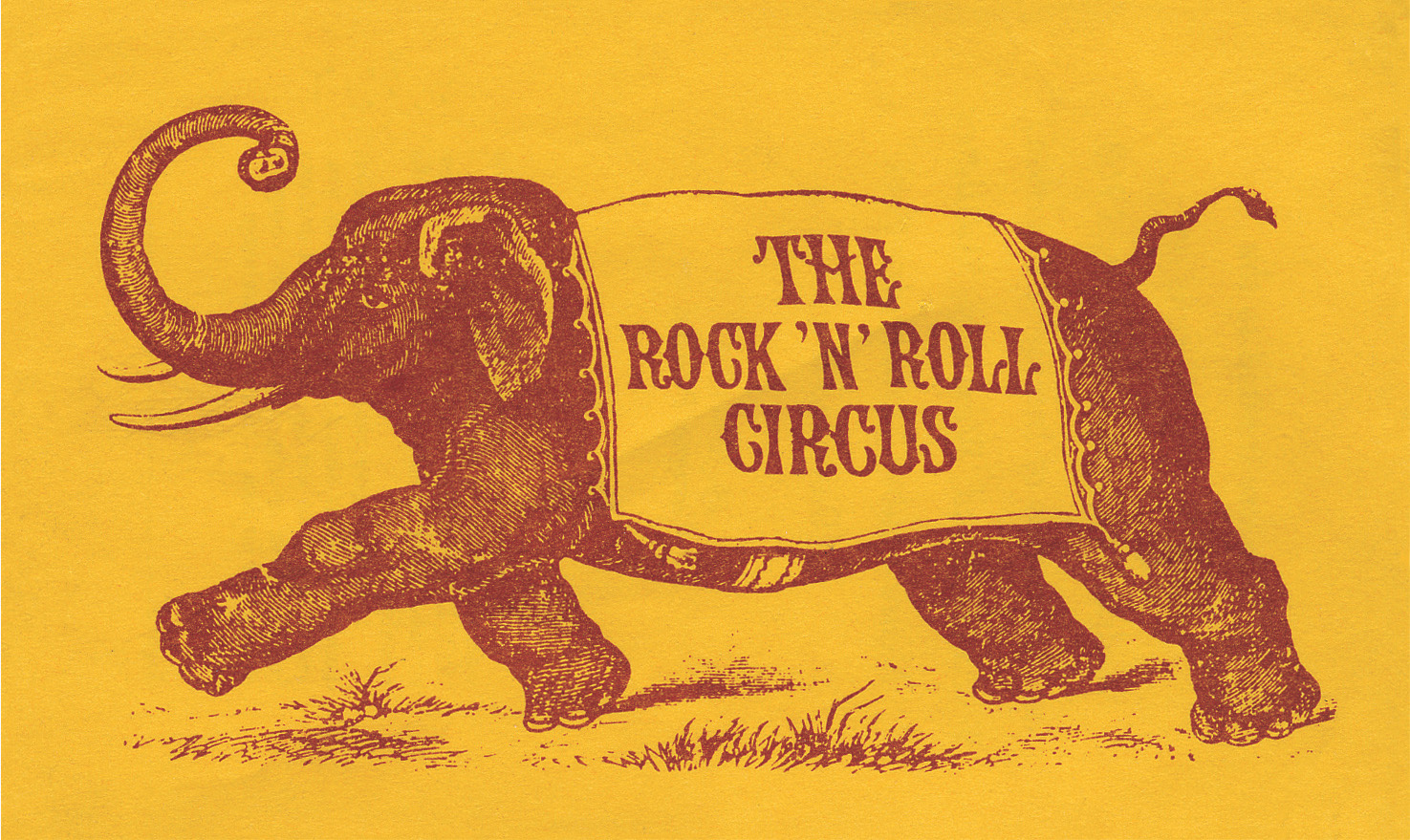 A by-invitation-only screening of the legendary Rolling Stones Rock and Roll Circus is set for London’s Dolby Screening Room on Tuesday, December 11, marking the 50th anniversary of the filming of the event which took place at the studios of Intertel/VTR Services, just a few miles away in North London. While the original inspiration is in dispute (with several people taking credit for it) the idea was to film a rock and roll show in the context of a traditional circus with The Rolling Stones serving as on-screen hosts, and so the studio was dressed as a circus tent for the occasion.

Performances by The Who, Taj Mahal, Marianne Faithfull, Jethro Tull and, of course, the original line-up of The Rolling Stones (Mick Jagger/Keith Richards/Charlie Watts/Brian Jones/Bill Wyman) were filmed before an audience comprised of The Rolling Stones fan club members, New Musical Express contest winners and a few American Hells Angels.  Envisioned as a BBC special, the project was shelved, but in the intervening 28 years it was regarded as “The Holy Grail” of rock films until the film finally saw the light of release in 1996 through ABKCO Films.

In an interview for The Independent in 1996, David Dalton reflected on the event:

“The Rock and Roll Circus captures the delirious optimism of an era. Depending on your point of view, it was either the high point in the history of the cosmos, or a period of mass hallucination, or both. But call it what you will, for a brief moment it seemed that rock ‘n’ roll would inherit the earth.”

In conjunction with its 50th anniversary, ABKCO will release an expanded edition of The Rolling Stones Rock and Roll Circus in Spring 2019. It will be the first concert film to be presented in both Dolby Vision and Dolby Atmos sound. The film’s 4K restoration was sourced from the 35mm internegative and, for the first time, presented in wide screen format (16:9 for home and 1:85 for theatrical showings supervised by original cinematographer Tony Richmond).

The 50th Anniversary edition of Rock and Roll Circus was produced by ABKCO’s Robin Klein and Mick Gochanour, the GRAMMY® award-winning team behind Sam Cooke: Legend and (The Rolling Stones) Charlie Is My Darling – Ireland 1965.   Gochanour noted, “Watching it in widescreen is like seeing a whole new film at times with amazing intimacy and detail.”

Director Michael Lindsay-Hogg is the pioneering music video director behind The Beatles’ Let It Be feature film and many of The Rolling Stones’ seminal video clips. During the course of his career, he has directed specials for Simon and Garfunkel, Neil Young, Paul Simon and The Who. Tony Richmond is the veteran cinematographer whose feature film credits include The Kids Are Alright featuring The Who, The Man Who Fell To Earth starring David Bowie, and Jean-Luc Godard’s Sympathy For The Devil, a restored version of which is a recent ABKCO Films release.

“Michael Lindsay-Hogg . . . is a very creative guy,” noted Mick Jagger. “We came up with this idea and the whole idea, obviously, is to make it a mixture of different music acts and circus acts, taking it out of the normal and making it slightly surreal . . . mixing the two up. And also we wanted as many different kinds of music as possible. So that’s why we thought about who would be the best kind of supporting acts.”

Regarding the version that the audience in London will view on December 11, Greg Penny, a celebrated immersive audio consultant notes “Dolby Atmos provides the listener with the most comprehensive experience that exists today. The objective was to give the listener the most realistic, immersive Rock and Roll Circus to date. It’s as if you were in that tent with The Rolling Stones, The Who, Taj Mahal, John Lennon, Jethro Tull and Marianne Faithfull, and you were part of the audience there fifty years ago.

It can be said that what Dolby Atmos does for sound, Dolby Vision does for visuals. Dolby Vision is an advanced HDR technology that delivers enhanced contrast, detail and dimensionality to the screen by empowering every pixel with a much broader range of color and brightness. Both of these technologies have never before been applied to a concert film simultaneously, making The Rolling Stones Rock and Roll Circus a first of its kind.