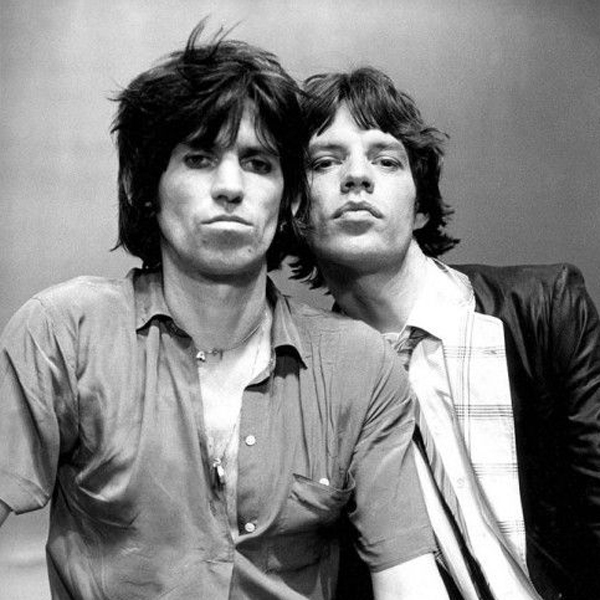 The songwriting partnership of Mick Jagger and Keith Richards is one of the most successful songwriting partnerships in history which still continues today.  Their musical collaboration has produced the majority of the Rolling Stones catalog and Jagger/Richards songs have been recorded by artists across all genres.

“Mick and I knew by now that really our job was to write songs for the Stones.  It took us eight, nine months before we came up with “The Last Time,” which is the first one that we felt we could give to the rest of the guys without being sent out of the room.  If I’d gone to the Rolling Stones with “As Tears Go By,” it would have been ‘Get out and don’t come back.’  Mick and I were trying to hone it down.  We kept coming up with these ballads, nothing to do with what we were doing.  And then finally we came up with “The Last Time” and looked at each other and said, let’s try this with the boys.  The song has the first recognizable Stones riff or guitar figure on it; the chorus is from the Staple Singers’ version, “This May Be the Last Time.”  We could work this hook; now we had to find the verse.  It had a Stones twist to it, one that maybe couldn’t have been written earlier—a song about going on the road and dumping some chick.   “You don’t try very hard to please me.”  Not the usual serenade to the unattainable object of desire.  That was when it really clicked, with that song, when Mick and I felt confident enough to actually lay it in front of Brian and Charlie and Ian Stewart, especially, arbiter of events.  With those earlier songs, we would have been chased out the room.  But that song defined us in a way, and it went to number one in the UK. – Keith Richards from his autobiography “Life”

Released during the first week of June 1965, “(I Can’t Get No) Satisfaction” embodied the idea of writing a song around a riff, rather than a vocal melody or chord progression, and was the band’s first US #1.

“I wrote “Satisfaction” in my sleep.  I had no idea I’d written it, it’s only thank God for the little Philips cassette player.  The miracle being that I looked at the cassette player that morning and knew I’d put a brand-new tape in the previous night, and I saw it was at the end.  Then I pushed rewind and there was “Satisfaction.”  It was just a rough idea.  There was just the bare bones of the song, and it didn’t have that noise of course, because I was on acoustic.  And forty minutes of me snoring.  But the bare bones is all you need.  I had that cassette for a while and I wish I’d kept it.  Mick wrote the lyrics by the pool in Clearwater, Florida, four days before we went into the studio and recorded it—first at Chess in Chicago, an acoustic version, and later with the fuzz tone at RCA in Hollywood.  I wasn’t exaggerating when I wrote a postcard home from Clearwater that said, “Hi Mum.  Working like a dog, same as ever.  Love, Keith.” – Keith Richards  from his autobiography “Life”

The first big, classic ballad Mick and Keith wrote was “As Tears Go By” (he wrote the lyrics and Keith wrote the melody) and Jagger acknowledges that it was a “very melancholy song” for a 21 year to write in this excerpt from his December 14, 1995, interview with Jann Wenner from “The Rolling Stone Interview: Jagger Remembers”.

Mick goes on to say,  “It was one of the first things I ever wrote. I see songwriting as having to do with experience, and the more you’ve experienced, the better it is. But it has to be tempered, and you just must let your imagination run.

You can’t just experience something and leave it at that. You’ve got to try and embroider, like, any land of writing. And that’s the fun part of it. You have this one experience looking out of a window, seeing children. Well, you might not have felt anything, but then you just let your mind drift and dream, and you imagine an older person doing that. You put yourself in their point of view, and you start to write other things, and all this is a very subconscious thing. Out of that comes a mature thought, out of a young person.

I was reading Pushkin, and his stories are autobiographical. But not totally, because he was never in Siberia – but his friends were, so he uses it. You use your own experience, and then you spice it up with your friends’ observations and your imagination.”

The 2012 documentary “Charlie is my Darling – Ireland 1965” offers a rare glimpse into Mick and Keith’s songwriting process.  We see them in the midst of creating what was to become “Sitting on a Fence” – bouncing their ideas off each other and joking around.

Although most Jagger/Richards compositions have been collaborations, some of the songs credited to the famous partnership have been solo songwriting from either Jagger, whose examples include “Sympathy for the Devil” and “Brown Sugar“, or Richards whose examples include “Ruby Tuesday” and “Connection”. This is comparable to the Lennon/McCartney partnership, who also adhered to a tradition of joint credits even on numbers that were written by just one of the pair.

Jagger/Richards songs have been featured in such iconic films including Martin Scorsese’s “Goodfellas”, “Casino” and “The Departed” (“Gimme Shelter”), “Mean Streets” (“Jumpin’ Jack Flash”), “Full Metal Jacket” (“Paint It Black”), “Apocalypse Now” (“(I Can’t Get No) Satisfaction”) and “The Big Chill” (“You Can’t Always Get What You Want”).