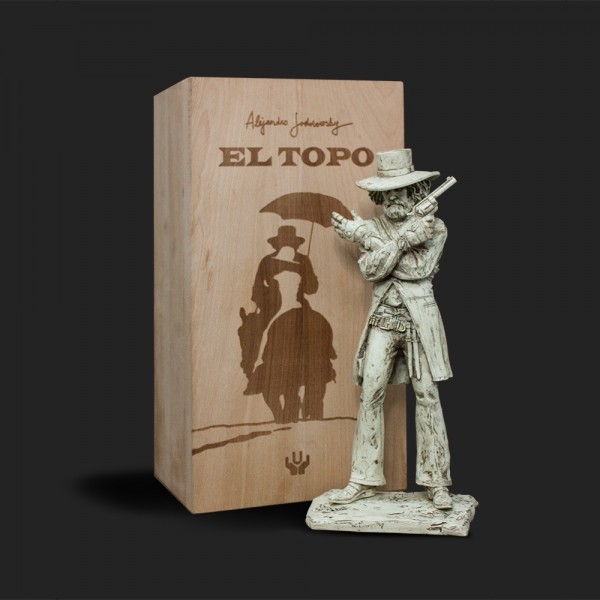 GET IT FROM THESE RETAILERS:
ORDER

ABKCO Films, a division of ABKCO Music & Records, Inc., and Unbox Industries are releasing a series of limited edition figurines based on the film works of one of the world’s most controversial and provocative filmmakers, Alejandro Jodorowsky. A series of four figurines are based on the characters from El Topo and Holy Mountain.

The first figure released is El Topo (The Mole) from the landmark cult film of the same name that began the Midnight Movie phenomena of the counterculture 1970s. Classic Americana and avant-garde European sensibilities meet Zen Buddhism and the Bible as master gunfighter and cosmic mystic El Topo, played by Jodorowsky, must defeat his four sharp-shooting rivals on an ever increasing path to allegorical self-enlightenment and surreal resurrection. The statue, made of polystone, a full 14 inches in height and distress brown in color, features exquisite detail and is packaged in a specially crafted wood embossed box. Each piece bears the replica signature of Alejandro Jodorowsky.

The highly respected sculptor Andrea Blasich worked closely with ABKCO and Jodorowsky to ensure the figurines are as realistic as possible to their characters from the films.

Alisa Coleman, Chief Operating Officer for ABKCO noted: “Each piece in the collection features an iconic character created by the brilliant Alejandro Jodorowsky. A perfect companion to his films, we are sure his many fans will appreciate the care and meticulous detail to the imagery of the films.”

Dan Willett, CEO of Unbox Industries commented:
“We were thrilled to hear that Mr. Jodorowksy was involved in the creative production process of each character we are making. I hope that excitement will be shared by a multitude of his fans worldwide when they finally see what we have achieved.”

We hope that our figurines will not only be treasured by established fans but also engage with people unfamiliar with Alejandro’s work & inspire them to watch the films they are based on.”

Unbox Industries will be releasing works influenced by Jodorowsky’s The Holy Mountain later this year, and in 2017.