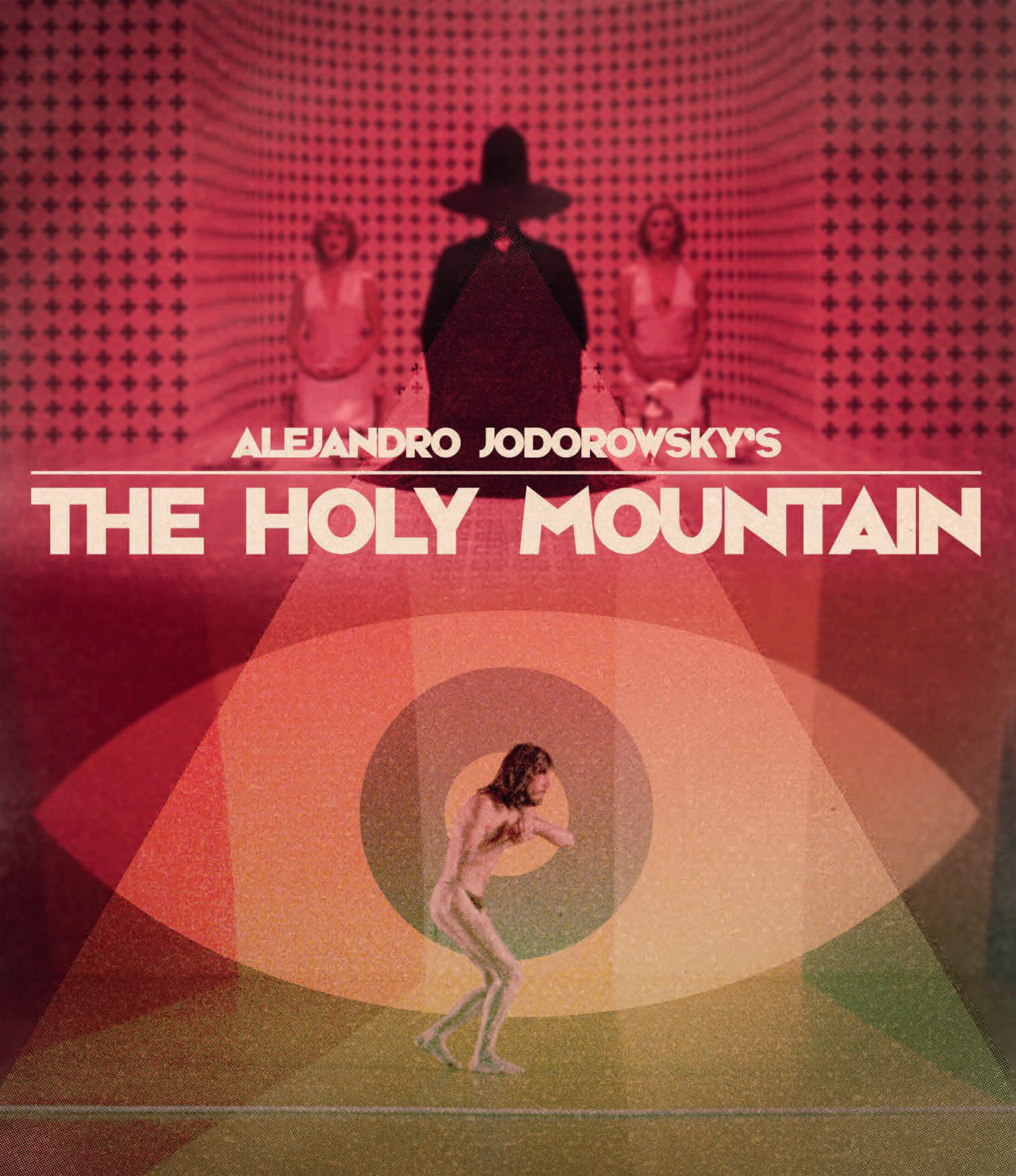 The scandal of the 1973 Cannes Film Festival, writer/director Alejandro Jodorowsky’s flood of sacrilegious imagery and existential symbolism in The Holy Mountain is a spiritual quest for enlightenment pitting illusion against truth. The Alchemist (Jodorowsky) assembles together a group of people from all walks of life to represent the planets in the solar system. The occult adept’s intention is to put his recruits through strange mystical rites and divest them of their worldly baggage before embarking on a trip to Lotus Island. There they ascend the Holy Mountain to displace the immortal gods who secretly rule the universe.

Awakening from a comatose sleep and covered in insects, a bearded thief (Horácio Salinas) is almost crucified by children but he is then rescued by an amputee dwarf. After he and the dwarf share a joint, they travel through different scene after scene of surreal images. They wander into a town populated by freaks, fascists, hookers, and religious fanatics, where skinned, crucified livestock are paraded down the street. Costumed frogs and iguanas bloodily reenact the Spanish conquest of South America, Innocent people are massacred, and birds fly out of their bullet wounds as soldiers of this Mexican police state rape peasant women for the benefit of tourists who photograph these horrific tableaux. The thief gets drunk with Roman soldiers who proceed to use his body as a mold to create hundreds of kitschy Christ statues. He returns to the street and, with the aid of a fistful of balloons, he rises to the top of tower where he encounters “The Master,” an alchemist (Jodorowsky). The alchemist demonstrates his transformational prowess by turning the thief’s excrement into crystals and gold.

A mother wakes up her son by tickling his genitals. She sits on the toilet seat while he takes a bath. A gas is sold that turns mothers into cannibals who then eat their children. A handbag case comes equipped with a bear trap for feminists to castrate men. The ruler of an empire is deaf, mute and blind. Before making an important decision, he puts his hand into his wife’s sexual organs. If they are moist, the decision is positive. If dry, the response is negative. Groups of young men are initiated into a secret society by cutting off their penises.

The alchemist then leads the thief to a room where he views the bodies, naked and shaved, of seven wealthy people of notable achievement. Each person is corrupt and greedy involved in politics, war or mass marketing. Each has their own planet and a weakness. They are willing to give up their money and be reborn as a Buddhist monk. They are preparing for their respective spiritual awakenings, an ascension up “the holy mountain,” in search of the secret of eternal life. They include a sexually perverse bed maker and a craftsman who creates religious weaponry and a woman with Kabala tattoos. The Alchemist leads nine souls up the mountain where, it is believed, nine wise masters reside and must be replaced. The nine represent the planets of our solar system, based on, and distorted from, their classic meanings in astrology and alchemy with earth portrayed by a Christ figure. Along the way, they encounter more sights, including a chicken massacre and an old man who shoots tiger breast milk. They go through many confusing and mystical treks until they finally reach the mountain. When they get there, the wise men are shown to be fakes and Jodorowsky, the film director, and company laugh at how their trip was pointless.

Jodorowsky says “Zoom out camera” and the camera zooms out to show the sound crew and cameramen. The whole point of the film is pointlessness. It reveals the absurdity of religion and mysticism. Jodorowsky shows an overwhelming slew of religious and mystical symbolism and many are led to believe that they are significant. Jodorowsky intones: “The flower knows. You don’t need to ask it. Plants are the books where knowledge is written. The grave is your first mother.” However, at the end Jodorowsky lifts the veil and shows that it was all meaningless. Even the movie is an illusion, the film admits to being a meaningless illusion, just like religion and the idea of higher powers. Or is it?