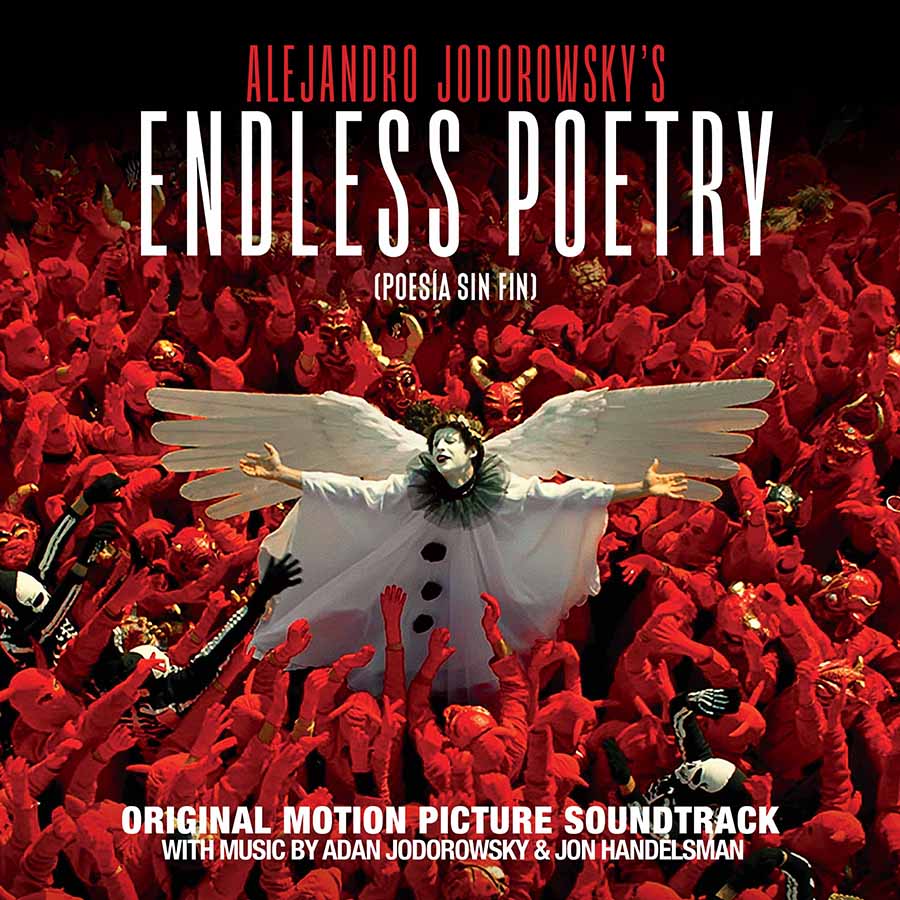 Endless Poetry (Poesia sin fin): Original Motion Picture Soundtrack was composed and performed by Alejandro’s son Adan Jodorowsky (aka Adanowsky), who also stars in the film, portraying his own father as a young man.

Described by Variety as “a work of disciplined and touching emotional resonance,” Endless Poetry details Alejandro Jodorowsky’s life in his 20s. Against the wishes of his authoritarian father, the protagonist leaves home to pursue his dream of becoming a poet, and is introduced to the bohemian and artistic inner circle of Santiago, Chile in the 1940s and 50s. He meets Enrique Lihn (Leandro Taub) and Stella Diaz (Pamela Flores), two unknown poets who would become driving forces of the twentieth-century Hispanic literature. Told through a uniquely surreal and psychedelic visual language, with a soundtrack to match, Endless Poetry is an ode to the quest for beauty and inner truth as a universal force capable of changing one’s life forever.

Raised in France, Adan Jodorowsky began playing piano and guitar at a young age, joining the punk band The Hellboys as a teen, and eventually released three solo albums. He has acted in several films, beginning with his father’s Santa Sangre (1989), and more recently, Julie Delpy’s 2 Days in Paris (2007). Adan also composed the score to The Dance of Reality (2013), which serves as a prequel of sorts to Endless Poetry, concentrating on the childhood of Alejandro Jodorowsky.

“When I compose music for films, it is the experience of allowing a dialog that has no words to emerge,” Adan Jodorowsky commented. “It is a dialog that is there, hiding in the story, and I become a channel in which the untold comes alive through music. So, in this case, I revealed a family sound story that has many landscapes, from mist to light.”

Multi-instrumentalist composer/arranger Jon Handelsman contributed four songs to the soundtrack. Born in New York, the saxophonist/flutist/clarinetist currently lives in Paris and leads the 11-piece l’Orchestre de la Lune. He has worked with Manu Dibango and Arthur H. among others and contributed to The Dance of Reality score. “Sueño sin fin” was composed and arranged by both Handelsman and Alejandro Jodorowsky (the filmmaker’s contribution to Endless Poetry (Poesia sin fin): Original Motion Picture Soundtrack).