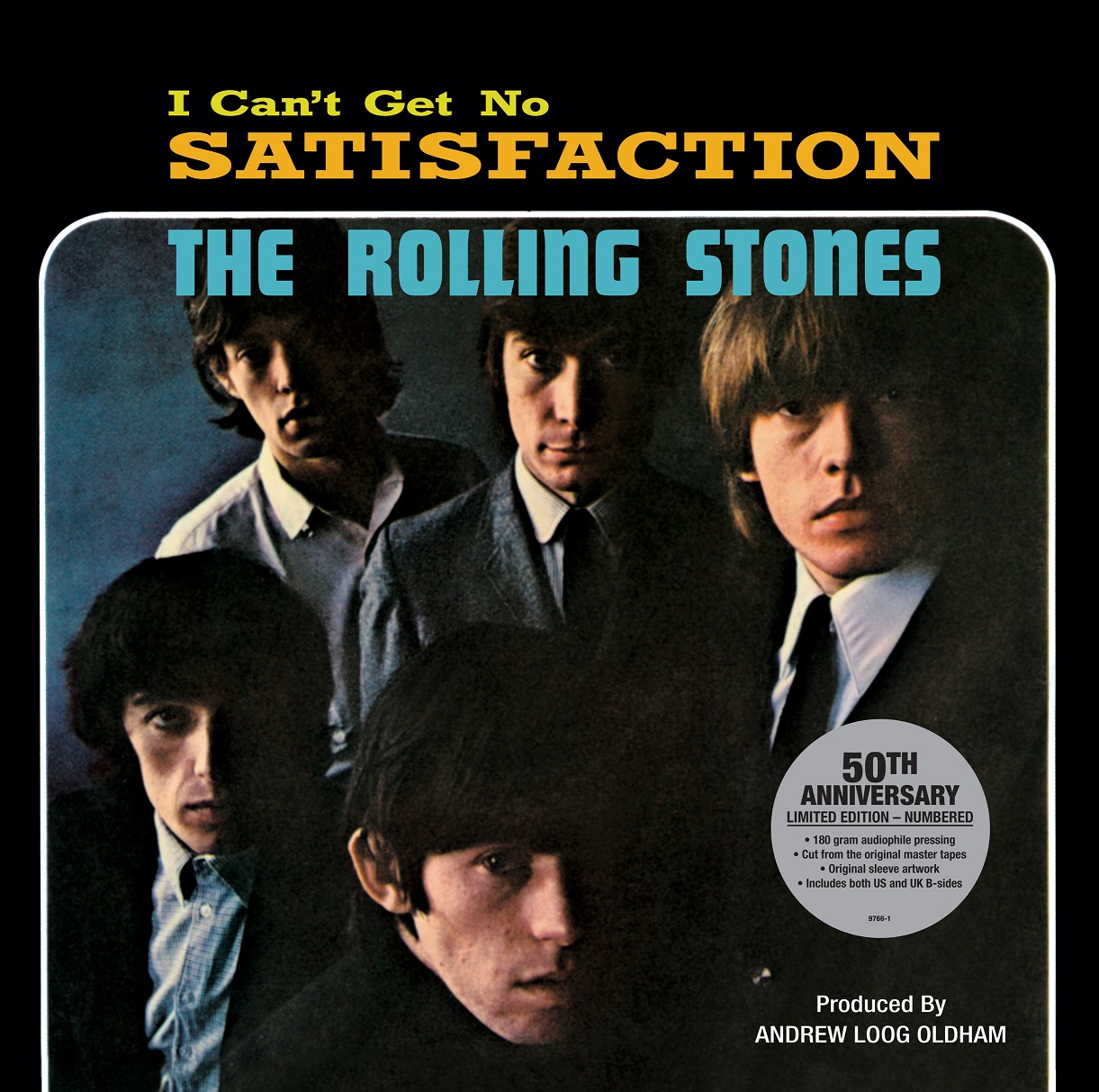 The Rolling Stones began making their mark on the world of recorded music in 1963, releasing a string of singles and albums that were successful on both sides of the Atlantic. However, it was “(I Can’t Get No) Satisfaction,” first released in June 1965, that gave the band their first #1 on the U.S. charts and subsequently catapulted them into mega-stardom.

On July 10, ABKCO Records will celebrate the golden anniversary of “Satisfaction” achieving #1 status by releasing a limited edition, numbered 12-inch version of the single on 180-gram vinyl. While the smash hit comprises the entire A-side, the B-side consists of both original U.S. and UK “Satisfaction” flip sides: “The Under Assistant West Coast Promotion Man” and “The Spider and the Fly,” respectively. The record is housed in a sleeve featuring award-winning photographer David Bailey’s shot of the group, recreating the original 7-inch single artwork. Mastered by Carl Rowatti at Trutone Mastering Labs and cut from the original mono master tapes, the 45-rpm 12-inch format makes this a true audiophile pressing, allowing for wider grooves that yield louder levels, broader range, deeper bass and better high frequency response.

Released as a single by London Records in the U.S. on June 6, 1965, “(I Can’t Get No) Satisfaction” shot up the charts to #1 on July 3 (Record World) and July 10 (Billboard, Cashbox), supplanting both “Mr. Tambourine Man” by the Byrds and “I Can’t Help Myself” by the Four Tops. It held the top spot for three weeks on Record World’s chart, and four weeks on Billboard and Cashbox’s charts. On July 19, 1965, “Satisfaction” became the band’s first record to be certified gold by the RIAA. The UK version, released by Decca on August 20 of that year, would become the band’s fourth #1 single in their home territory. The track made its LP debut on July 30, 1965, when it was included on the U.S. version of Out of Our Heads. ABKCO Films’ much lauded documentary The Rolling Stones Charlie is my Darling – Ireland 1965 features the band’s first performance of “Satisfaction” to a paying audience in Dublin, Ireland on September 3. “(I Can’t Get No) Satisfaction,” has been the centerpiece of the Rolling Stones’ live repertoire and a constant component of their set list ever since.

The iconic guitar riff that opens the song was composed by Keith Richards, who recorded the sequence of notes in a dreamlike state, in the middle of the night on a home tape recorder while the band was on tour in the U.S. After listening to his own recording and devising the song title “(I Can’t Get No) Satisfaction,” he played the riff for Mick Jagger by the pool at the Gulf Motel in Clearwater, FL in early May, 1965. Jagger immediately composed the lyrics.

Having scrapped a version of “Satisfaction” that was recorded at Chess in Chicago on May 10, the group re-recorded the song at RCA Studios in Hollywood, CA on May 12. It was this version that would take over the airwaves and shoot up the charts the following month.

Textured by the aid of a Gibson Maestro Fuzz-Tone pedal, Richards’ riff was originally intended to be replaced by a horn section, but the recording sounded complete to producer/manager Andrew Loog Oldham and engineer David Hassinger. Jagger’s lyrics, simultaneously expressing sexual frustration and disdain for consumerist messages, would strike a nerve with the mostly young, rock ‘n’ roll buying public. Ironically, the only two people in the Stones’ camp who were initially against turning “Satisfaction” into a single were its authors – Jagger and Richards.

“The Under Assistant West Coast Promotion Man,” credited to Nanker Phelge (a pseudonym used on compositions written by the entire band), is a lighthearted jab at George Sherlock, an employee of London Records at the time, who accompanied the group on their first U.S. tour. The Stones saw Sherlock as a vain, toupee-topped, seersucker suited music biz flunky who was ultimately harmless. In later years, Sherlock expressed pride in having been the subject of the song. Loosely based on Buster Brown’s hit “Fannie Mae,” it is the lyrical content that gives the tune historic importance; the prodding of authority figures through song was almost unprecedented at the time. In the UK, Decca decided to instead use the country-blues composition “The Spider and the Fly” (also by Jagger/Richards) as the B-side to “Satisfaction,” the company assuming that the abundance of American references on “The Under Assistant West Coast Promotion Man” may have gone over the heads of British listeners.

Pressed by Quality Record Pressings in Salina, KS, and limited to 14,000 numbered copies in North America, ABKCO’s “(I Can’t Get No) Satisfaction” 12-inch single will be released a half-century to the day after the landmark song dominated U.S. charts and helped transform the course of pop music history.

ROLLING STONES’ “(I Can’t Get No) SATISFACTION” 12-inch

(I Can’t Get No) Satisfaction