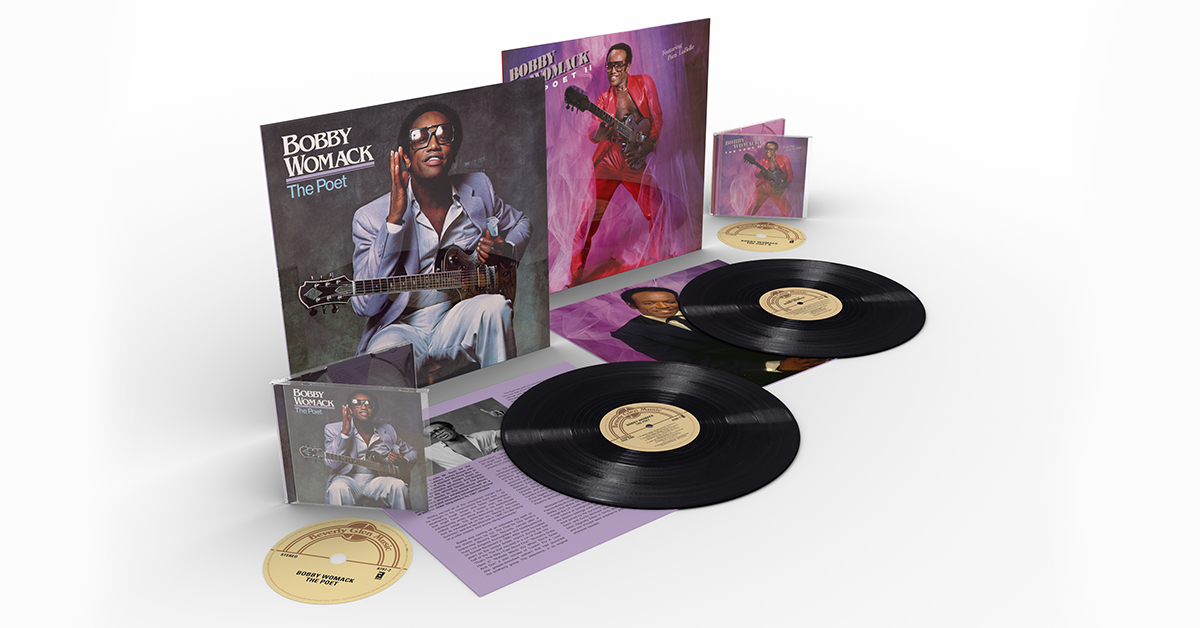 This year marks the 40th anniversary of the initial release of The Poet, the Bobby Womack album that served to relaunch his career and established him as a renewed force to be reckoned with in the urban music field in the 1980s. That album was followed by The Poet II which further solidified Womack’s position as the industry’s leading exponent of traditional soul that he maintained until his passing in 2014.  Now, for the first time, these classic albums have been remastered from the original tapes.

Long believed to be lost, the original tapes have been recovered and are sourced for the remasters of The Poet and The Poet II. To offer the best possible listening experience, both The Poet and The Poet II will be pressed on heavyweight (180 gram) vinyl, making the albums available in the vinyl marketplace for the first time in decades. The historic albums packaged on LP and CD with extensive liner notes by R&B scholar Bill Dahl will release on March 19 in the US and Canada with concurrent worldwide HD digital availability. The rest of world territories will release CD and LP on April 30th 2021.

Shortly after its release, The Poet, produced by Womack, rose to the #1 slot on Billboard’s Top R&B Album chart and thus provided commercial validation for his musical posture that was so removed from the disco trend of the era. As illustrated in the newly penned liner notes by Bill Dahl, “The Poet was split into two distinct musical moods. The first side of the album placed Bobby in up-tempo settings and let the infectious grooves flow freely. Side two cast Bobby as the romantic balladeer, a seductive image that had long sent his legion of female fans into a frenzy.”

“If You Think You’re Lonely Now,” the album’s leading single, went to #3 on Billboard’s Hot Soul Singles chart and stayed there for four weeks.  Decades later, a major sample of “If You Think You’re Lonely Now” provided the basis for Mariah Carey’s #1 hit  “We Belong Together.”  The album also yielded two additional chart singles, “Secrets” and “Where Do We Go From Here.” It went on to become the biggest selling full-length album of Bobby Womack’s career.

The massive success of The Poet set the stage for the recording of The Poet II  in 1983. As with its predecessor, The Poet II found both commercial and critical success on both sides of the Atlantic with the UK’s New Musical Express naming it Best Album of 1984.  Among the album’s highlights are three duets with Patti LaBelle including “Love Has Finally Come At Last” which was a presence on Billboard’s Hot Soul Singles chart for 17 weeks, ultimately rising to #3.  Jazz guitarist George Benson is also heard on the album; his presence is something of a favor returned.  Womack was the composer of “Breezin’,” the instrumental that served as Benson’s major label breakthrough.  The Crusaders’ Wilton Felder was featured on the set as was drummer James Gadson of Watts 103rd Street Rhythm Band renown. He along with Andrew Loog Oldham and Womack comprised the album’s production troika.

Official Lyric Video for “Through The Eyes of a Child”

Bobby Womack was inducted into the Rock and Roll Hall of Fame in 2009 by Ronnie Wood of The Rolling Stones. Bobby Womack’s lengthy association with ABKCO dates from his early career mentorship by Sam Cooke.  ABKCO Music serves as music publisher for the catalog of Womack’s most notable compositions including “Across 100th Street,” “Woman’s Gotta Have It,” “That’s The Way I Feel About ‘Cha,” “Breezin’,” “It’s All Over Now” and “American Dream.”