ABKCO Rolls Out Three More Clearly Classic Stones Titles May 6: Get Yer Ya-Ya’s Out!, 12 X 5, Through The Past, Darkly 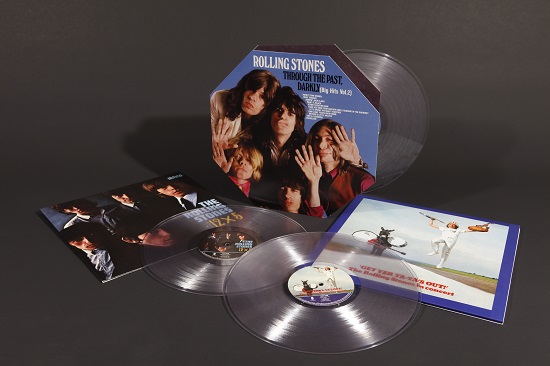 ABKCO has announced three significant additions to its Rolling Stones “Clearly Classic” vinyl series that launched last year. Set for reissue on clear 180-gram vinyl on May 6 are Get Yer Ya-Ya’s Out! The Rolling Stones In Concert, 12 X 5, and Through the Past, Darkly (Big Hits Vol. 2). The titles join Beggars Banquet, Let It Bleed, and Hot Rocks: 1964-1971, which received resoundingly positive critical and consumer response upon release in 2013. All releases in the Clearly Classic series have been meticulously mastered from high resolution audio files sourced from the original master tapes, assuring optimal sound quality that exceeds both conventional CD audio and digital downloads.

Get Yer Ya-Ya’s Out! The Rolling Stones in Concert holds the distinction of being the first live album by any artist to have reached #1 on the UK charts. Recorded at New York City’s Madison Square Garden on November 27 and 28, 1969, Ya-Ya’s is considered the Stones’ finest live album. It was the band’s first release to feature guitarist Mick Taylor, who had joined several months earlier. Ya-Ya’s includes hits such as “Jumpin’ Jack Flash,” “Street Fighting Man,” and “Sympathy for the Devil” but is most notable for an 9+ minute version of “Midnight Rambler” with extended harmonica solos, thought by many to be the best version of the song.

Pre-order Get Yer Ya-Ya’s Out! The Rolling Stone in Concert

Through the Past, Darkly (Big Hits Vol. 2) was originally released in September 1969, and is the second compilation album of hits by the Rolling Stones, following Big Hits (High Tide and Green Grass). Through the Past made a huge splash on both sides of the Atlantic, reaching #2 in both the U.S. and UK. The album includes numerous Stones’ classics including “Jumpin’ Jack Flash,” “Let’s Spend The Night Together” and “Honky Tonk Women.” The packaging stays true to the original layout, with its trademark octagonal-shaped album cover. The inside flap contains this poem written by Jones, who died two months before the release:

When this you see, remember me,
and bear me in your mind.
Let all the world say what they may,
speak of me as you find.

Pre-order Through the Past, Darkly (Big Hits Vol. 2)

Get Yer Ya-Ya’s Out! The Rolling Stones in Concert

Side 1
Around and Around
Confessin’ the Blues
Empty Heart
Time Is on My Side
Good Times, Bad Times
It’s All Over Now

Through the Past, Darkly (Big Hits Vol. 2)

Side 2
Honky Tonk Women
Dandelion
2000 Light Years from Home
Have You Seen Your Mother, Baby, Standing In The Shadow?
Street Fighting Man